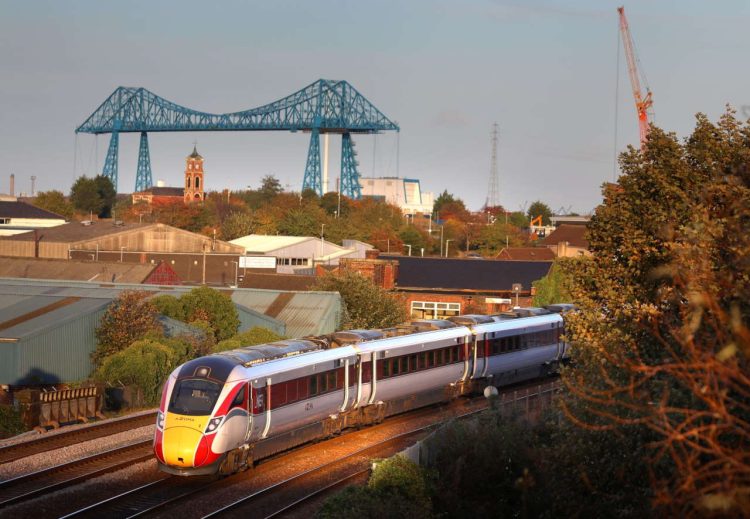 Direct Azuma services are now running between Middlesbrough and London King’s Cross as LNER makes Teesside the latest destination of their world-class trains.

London North Eastern Railway (LNER) will be running weekday services in both directions and will see the first direct route between Middlesbrough and London in over thirty years.

The services will also see Thornaby, which is very close to Middlesbrough, connect directly with London King’s Cross with journey times of approximately three hours.

“We’re proud to be introducing our revolutionary Azuma services between Middlesbrough and London King’s Cross. Their arrival will transform travel for customers and generate further economic opportunities for the area, with our direct services making business, leisure and international travel simpler, smarter and greener.”

“Our Azuma trains offer customers greater comfort and space, keeping people connected with free
onboard Wi-Fi and sockets at every seat. Our superb at-seat catering offers in both Standard and
First further enhance our customer experience.”

Bringing substantial environmental benefits, Azuma are bi-mode trains using overhead wires to run using electric power for approximately 220 miles of the 239-mile journey both to and from Middlesbrough.

LNER has gone to great lengths to enhance customer experiences, which include the LNER mobile app which makes direct booking easier for customers and also includes the opportunity to sign up to their loyalty scheme, LNER Perks.

For the launch of the new service, LNER has put in place, good value family tickets for the journey between Middlesbrough, Thornaby and London King’s Cross and includes fixed-price all-in-one return fares for two adults and up to four children for £129, which brings savings of up to 48% when compared to the equivalent Standard tickets.

LNER are planning extra Middlesbrough services in the future when further planned works around Middlesbrough station have been completed. The future work is currently in the planning stages with Network Rail and will bring significant timetable changes for the East Coast Main Line once completed.

“This Government is committed to levelling up the whole of the UK and improving rail connectivity is key in helping us to build back better and greener, while allowing everyone to experience the best places our country has to offer.”

“This direct service between Middlesbrough and London will be a huge boost for the North-East,
joining our Integrated Rail Plan in providing better access to jobs and opportunities, connecting
families and friends, and increasing tourism.”

“I am delighted that, after nine years of campaigning since I was first elected, this new direct link from Middlesbrough to London is finally here.”

“It is hugely welcome and a positive step towards much needed improved rail connectivity for the
area. Being able to travel to Parliament from my hometown will make for a far more convenient
commute and I am sure local travellers, both business and pleasure, will benefit from this new
service.”

“I pledged to get direct trains to London and after critical months of work, I’m delighted to see the first Azuma roll in. Phase one of our £34million upgrade is complete with phase two following early next year.”

“This connection will become increasingly important as we drive forward Teesworks and the
Teesside Freeport and capitalise on all of the opportunities these provide. We’re making
improvements at stations right across our region to give local people the fast, reliable and smooth
transport network they deserve.”

“Middlesbrough really is making huge strides towards an exciting and prosperous future, and this is another major milestone on that journey. We’re all about creating opportunity, jobs and aspiration for young people, and 21st century transport links like this are key to making that happen.

“This is just the start – it’s an important step, but there’s so much more to come.”

“It’s so pleasing to have worked alongside LNER to deliver the people of Middlesbrough their eagerly-awaited direct service to London.”

“This isn’t the end of the upgrades for Middlesbrough or the Tees Valley region, and we’ll continue
working with industry partners and stakeholders on delivering those as quickly as possible.”

“The railways are the backbone of this country, and I’m delighted we’re establishing a direct service between Middlesbrough and London for the first time in more than three decades.

“Not only will this world-class service provide green benefits, but it will also give the people of Teesside better connections for work, help bring loved ones together, and drive tourism to this fantastic region.

“This follows our ambitious Integrated Rail Plan which is building a better rail network that benefits everyone.”

Advance singe fares between Middlesbrough and London King’s Cross start from as little as £20.60 for Standard Class and £60 for First Class when booked via http://lner.co.uk

LNER wishes to remind customers that the wearing of a face-covering onboard trains and in stations is now a legal requirement, unless exempt. The rail operator also recommends that customers make seat reservations to allow the comfort of a seat during travel and can be made as little as 5 minutes before departure via the LNER website, LNER app or by visiting a travel centre.