HS2: New £2bn 225mph trains to be designed and built in the UK by Hitachi and Alstom 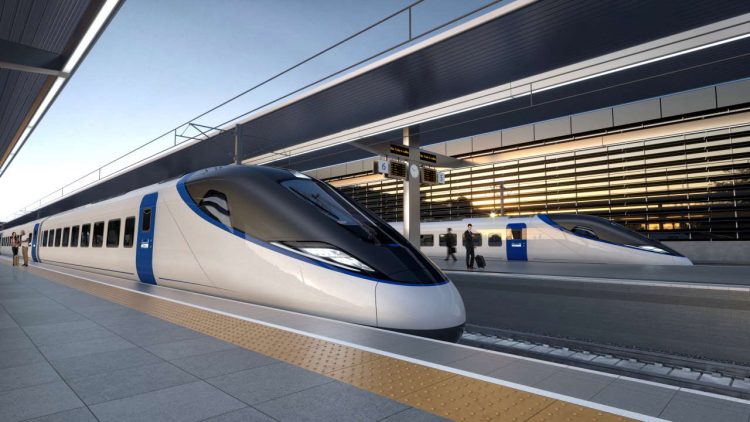 Britain’s new ‘Bullet Trains’, capable of transporting passengers at up to 225mph, will be designed and built in the UK.

The new high-speed trains will be built by Hitachi / Alstom JV at their factories in Derby, Crewe and County Durham in a major deal that will support up to 2,500 jobs in the UK.

For the first time, these Hitachi / Alstom trains will be entirely designed and assembled in the UK, supporting jobs, apprentices and roles for young people.

This announcement follows on from last month’s investment in Britain’s rail network, with faster journeys from London and across the North.

Designed in the UK, the trains will be able to travel at up to 225mph. The first train is expected off the production line in 2027, with the first passengers expected to travel onboard them between 2029 and 2033.

The design, manufacture, assembly and testing will be shared between Hitachi and Alstom:

Fully accessible trains will be a reality thanks to a two and half year design process which involved HS2 Ltd, the Department for Transport and the West Coast Partnership, the operator of the trains when they first come into service.

HS2 trains will operate seamlessly between HS2 and the current network, halving journey times across the UK. Each train will be 200m long but will be able to couple together to create a 400m long train with up to 1,100 seats.

Hitachi and Alstom will work with HS2 Ltd and Birmingham City Council to develop employment opportunities arising from the construction of a new maintenance depot at Washwood Heath in Birmingham.

Managing Director of the West Coast Partnership Development, Caroline Donaldson, said: “This announcement is a major step in the future of rail travel in this country.  The new fleet will enable us to set new standards for customer experience, accessibility and sustainability, and raise the bar for the entire UK rail industry.

“We look forward to working with HS2 and the Hitachi/Alstom joint venture to develop the design of these new trains and support the vision of an innovative high-speed railway.”

Transport Secretary Grant Shapps said: “Today’s announcement places Britain firmly at the forefront of the high-speed rail revolution with a billion pound investment in state-of-the-art trains serving communities right across the country from London to Glasgow.

“Not only does this show we are getting on with delivering better and faster journeys through our plans to upgrade the rail network, this is another landmark step in the delivery of HS2, sustaining 2,500 jobs and levelling up employment and leisure opportunities for generations to come.”

HS2 Ltd Chief Executive Mark Thurston said: “Today is a massive day for HS2. The trains that will be built at Derby and Newton Aycliffe will transform rail travel – offering passengers unparalleled levels of reliability, speed and comfort and help in the fight against climate change. I’d like to congratulate Alstom and Hitachi and I look forward to working with them as together we bring these exciting new trains to passengers across the UK.”

Andrew Barr, Group CEO, Hitachi Rail said: “We are excited to be pioneering the next generation of high speed rail in the UK as part of our joint venture with Alstom. This British-built bullet train will be the fastest in Europe, and I am proud of the role that Hitachi will play in helping to improve mobility in the UK through this project.”

Alstom’s Managing Director, UK & Ireland, Nick Crossfield said: “HS2 is a once-in-a-generation opportunity to transform Britain by building a sustainable transport system fit for the 21st Century. I am delighted that Alstom’s joint venture with Hitachi Rail has been selected to develop, build and maintain in Britain the next generation of high-speed trains.” The Washwood Heath Depot is HS2's maintenance facility and main control centre for HS2's entire network and will...