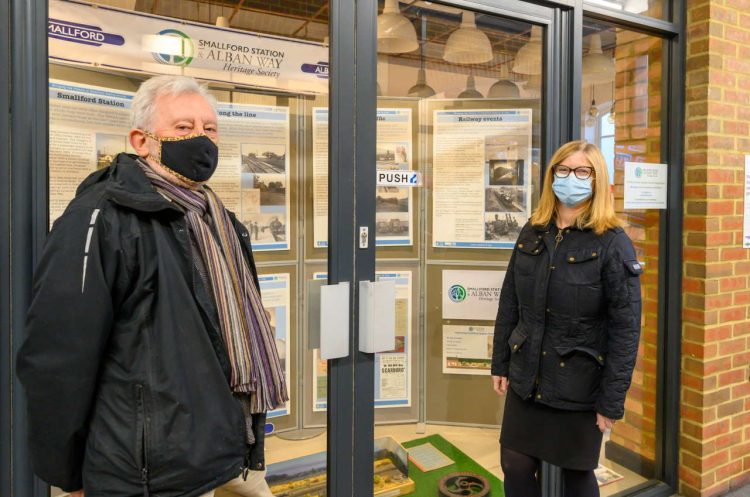 Hatfield station is hosting an exhibition about the former Great Northern Railway (GNR) branch line from Hatfield to St. Alban, 70 years after it carried its last passenger.

The exhibition is being staged by Hertfordshire rail heritage enthusiasts. The Smallford Station and Alban Way Heritage Society have taken over the window display at a vacant shop unit in Hatfield station to show a selection from the wealth of historical information about the branch line collected by Society members over the past decade.

Using the empty shop was the idea of HART, the Hatfield Association of Rail Travellers. They asked Great Northern, the modern-day train operator that manages Hatfield station, whether the society could exhibit some its artefacts in the shop. Great Northern’s property team welcomed the suggestion and made the unit available free of charge. Also on display are 1930s Art Deco-style travel posters designed by students at the Hertfordshire-based Oaklands College of Further Education.

The branch line opened in 1865 to link St. Albans with services to London King’s Cross. However, passenger numbers dropped when the Midland Railway opened a direct route to St Pancras just 3 years later.

Smallford was originally called Springfield and was built in 1866 as the line’s first intermediate station. To counter the loss of London passengers, the GNR encouraged local commuting and more stations and halts were added. For 60 years the line was used to deliver workers and raw materials to local industries, but from the 1930s onward the route’s passenger numbers declined and the last passenger service ran in 1951. The line continued to be used freight trains until 1968, but since then it has become part of the Alban Way footpath and cycleway.

The heritage society was formed in 2013 with the support of a Heritage Lottery Fund grant to ‘Bring the History of Smallford Station to Life’. In collaboration with St Albans District Council and Oaklands College, the society is currently fundraising for a community project to improve the environment around the station platform and the Alban Way users’ car park beside it.

Station Manager Karen Sherwin said: “We’re delighted to be helping our local community partners raise awareness of the fascinating history of the railway in Hertfordshire and the work of the Heritage Society. Our passengers will enjoy the display and it’s another valuable way for the station to serve the community we’re part of.”

Jeff Lewis, Chair of the Heritage Society, said: “We’re very grateful to Great Northern for this unique opportunity to display some of our exhibition at Hatfield station. Our long-term aspiration is to gain occupancy of Smallford’s original ticket office, a unique Grade 2 Listed Building, and to raise the funds necessary to renovate and restore it and open it to the public as a Community Heritage Centre.”

Mary Lowe of HART said: “HART is very focussed on ideas for improving the station and we were keen to see interim use made of the vacant units – both to provide interest for people passing through the station and to help raise the profile of local groups and facilities. We are working on ideas for further displays.”

Improvements in access to platforms 8-11 at London Euston completed Southern is running a special charter train, "The Metro Marauder", to celebrate the end of using their Class...