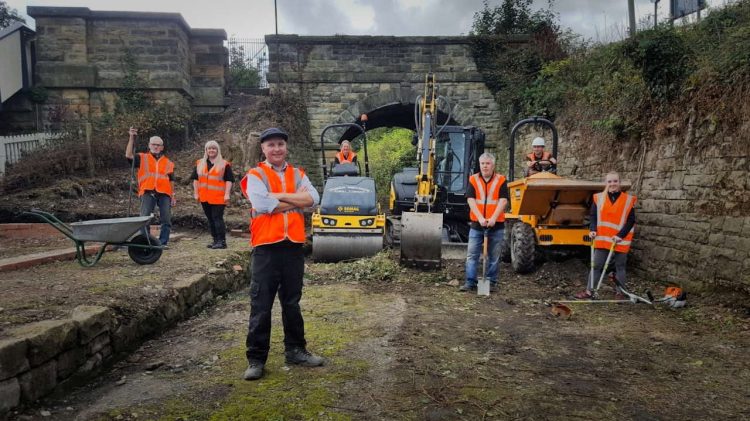 The Last Welsh Narrow Gauge Adventure, also known as The Glyn Valley Tramway, has launched a new £250,000 appeal to generate the funds to restore the platform and station building at their Chirk Site.

The Glyn Valley Tramway Trust has been at the site in Chirk since 2007, and volunteers have already been hard at work to clear vegetation from the old track bed and platform.

Funds generated by donations and memberships have paid for assets such as mini-diggers and dumper trucks, but now, the time has come to make a big push to raise funds to get the job done with the Station Rebuild Appeal.

Launched on the 27th December 2021, All Change At Chirk aims to raise £250,000 to rebuild the station building and platform at Chirk.

For a year, donations above £150 will see their name put on a donations wall, with a donation being able to be made in someone’s name or memory.

Funds from the appeal will see repairs made to the station’s retaining wall, which are essential works to keep the site safe. A rebuild of the station building will then give the Glyn Valley Tramway an official home.

A Council Buildings Inspector has given the green light for the remnants of the old station building to be reused.

A number of platform edging stones are missing and need new stone to be cut. Originally, Chirk had a single width gateway to access the tramway, but the GVTT are in discussions with Network Rail to have two access points, the original entrance and a second gate installed near to Network Rail’s disabled access ramp.

Finally, work will see a demonstration line laid. A debate on which gauge to use continues, but the first gauge to be installed will be 2’6″ This is so that the trust can move an ex Royal Naval Armaments Depot box van that is currently on a neighbouring property.

This box van will create a storage area for the GVTT, but may become a shop in later years

The tracks will be re-gauged to 2’3″ to welcome some special visitors.

The appeal will generate the funds required for the retaining wall, but will also start a fighting fund for asset purchases such as land and trackbed.

Planning consent has already been granted for the first section of the tramway from Chirk Station to a temporary station at Pontfaen, approximately 1 mile away.

There is a desire to reach Glyn Ceriog to team up with the Industrial Heritage Group who have restored the old engine shed.

Two surviving Glyn Valley Tramway carriages were rescued by John Milner and now live at the Talyllyn Railway in Tywyn, but Andrew Christie has told RailAdvent that he hopes to get these visiting Chirk to run with steam! This will be the first time in 86 years that a narrow-gauge train has arrived in Chirk.

If you would like to get involved at Chirk, please email [email protected]

There are a number of ways to donate, the first is by PayPal using the email [email protected] but you can find other ways to donate on the Glyn Valley Tramway website.

Andrew Christie told RailAdvent “Some are calling the Glyn Valley Tramway ‘The last Welsh narrow-gauge adventure!’ I feel this is somewhat true as venturing through the undergrowth knowing there was once rails there has been most exciting. …and it wasn’t long before evidence started to emerge.”

“My involvement with the Glyn Valley Tramway Trust has only been since last June when I visited the group with a view to filming a restoration project. It has been a delight to work alongside them as I film for another project about garden railways. However, I have felt the urge to assist the GVT-Trust further with developing an appeal for them.”