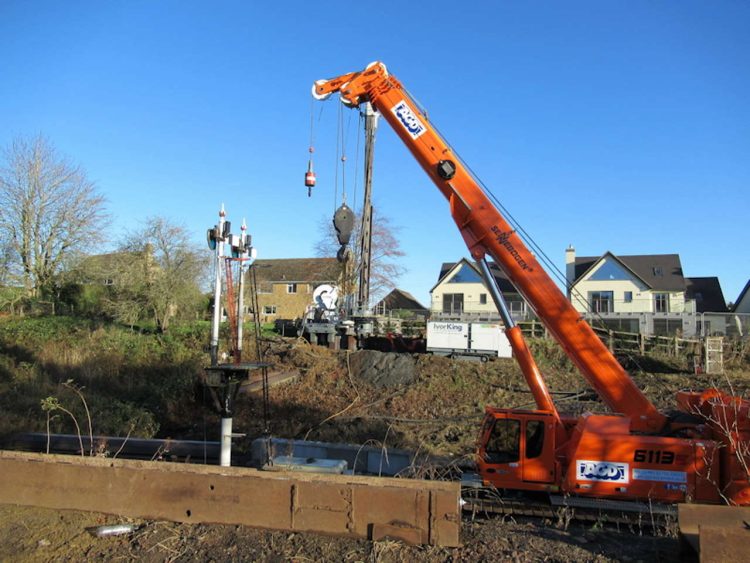 Gloucestershire Warwickshire Railway has been faced with having to carry out major repairs at two sites: to repair a water-damaged bridge and carry out remedial work caused by a landslip.

In early November, the Gloucestershire Warwickshire Railway Trust (GWRT) launched an appeal to raise £200,000 to fund the repair of Bridge 8 over the railway between Toddington and Broadway. Now, less than a month since the appeal launch, the full £200,000 target has been raised, and the appeal has been closed.

Bridge 8 carries the B4632 (formerly A46) road over the railway near Stanton. For many years, it has been weakened by corrosion and has been subject to traffic control and a speed restriction to reduce the risk of further damage to the bridge.

It is believed that the bridge’s waterproofing was damaged many years ago by public utilities. However, the companies that are believed to have caused the damage have since disappeared through privatisation, mergers, and name changes. In order to carry out repairs, the bridge must be propped up from underneath. That can only happen while the line is closed, which means during January and February.

Glyn Cornish, Chairman of GWRT, explains: “The Gloucestershire Warwickshire Steam Railway (GWSR) was required to take on responsibility for the 46 bridges and 51 culverts that cross the railway as a condition of purchasing the line 40 years ago.

“Unfortunately, when services including water and gas were laid over Bridge 8 long before we acquired the railway, we believe the waterproof decking was damaged, allowing water to seep through. Gradually, this has corroded the structural steelwork beneath the road surface.

“Although repairs were carried out by us some years ago, examination of the bridge has shown that corrosion has continued. Remedial works have been undertaken to dry the structure, but the damage was done and needs to be repaired.”

“Maintenance and repair of our bridges has been a significant part of the railway’s strategy as well as past fundraising efforts. For example, repair of the bridges that carry the railway over roads on the extension from Toddington to Broadway was the subject of a successful £500,000 fundraising effort in 2014. Thanks to the pandemic and the consequent loss of nearly two years of revenue, the GWSR needs additional support so that’s why GWRT has launched this appeal.”

Glyn added: “May I thank everyone for their past and future support of our wonderful railway and especially for such a rapid response to the current appeal so far. Without such support, we wouldn’t have the railway that thousands of people enjoy today.”

Besides repairing Bridge 8, remedial work is needed to the cutting between Winchcombe station and Greet Tunnel. Here, the cutting side collapsed during winter of 2019/20, the slip being caused by a combination of prolonged heavy rain overwhelming rainwater for new houses built on the site of the former Harvest Home pub, coupled with the complex clay geology of the ground. Prolonged heavy rain caused the soakaways to be overloaded, resulting in parts of the houses’ back gardens slipping down towards the line.

Immediately after the collapse, temporary repair work was carried out to prevent further damage, but permanent repairs are now being undertaken, funded by the insurers of the homes affected. The solution was designed by Kings Norton-based consulting engineers David Symonds Associates (DSACE) and Ground Investigation & Piling Ltd (GIP) of Kingswinford.

The work is being undertaken by Walsh Construction Ltd of Worcester, which has considerable experience of railway geology repairs, and Ivor King Piling of Nuneaton. A 120-tonne crane and a specialist Giken piling rig that includes an auger will drive steel sheet piles into the ground to allow the ground at the top of the cutting to be restored and remove the risk of further slips taking place.

Whilst the work is being carried out, the railway south of Winchcombe including Cheltenham Racecourse station will remain closed. However, the railway’s fully-booked Santa Special trains will still run, but only from Toddington to the ‘North Pole’ at Winchcombe. Post-Christmas trains, between 27th December and 3rd January 2022, will run between Broadway and Winchcombe to a special timetable.

Richard Johnson, Chairman of GWSR Plc said: “The work necessary to provide a permanent solution to the slip will take around 20 weeks to complete and should be finished in time for the railway to fully reopen in March 2022.

“I would like to apologise to our neighbours for the obvious noise and disturbance while this essential work is carried out – however, we have little choice but to complete the work to ensure the long-term stability of the earthworks.

“The cutting is part of the most significant earthworks on the railway which includes Greet Tunnel. It was dug over 100 years ago, with the railway opening in full in 1906.”

Jonathan Symonds of DSACE pointed out: “The cuttings and embankments on the railway, which were built at the beginning of the 20th Century, are steep by modern standards while back then there was little understanding of the geotechnics and behaviour of the soils in the area. New construction close to the line has disturbed the ground, contributing to the slip.

“While there is absolutely no risk to the properties nearby, there is little doubt that without this work, there would over time be further loss of the back gardens of the affected properties.”

New podcast takes a glimpse behind the scenes at Greater Anglia This year’s ‘Cotswold Festival of Steam’ at the Gloucestershire Warwickshire Railway will have the theme 'Somerset & Dorset...