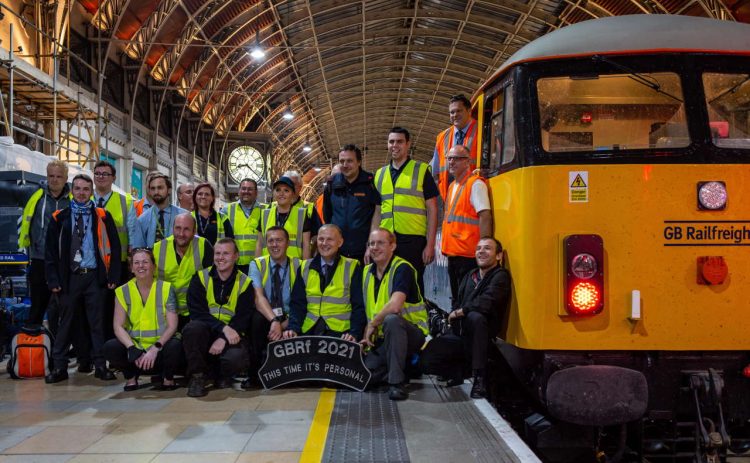 Prostate cancer is the most common cancer in men and affects one in eight men.

Earlier this year, GBRf named Class 66 locomotive 66769 Paul Taylor Our Inspiration in recognition of one of the tour organisers, and emblazoned with the charity’s iconic ‘Man of Men’ logo, which prompted plenty of conversations about the disease.

In total, ‘GBRf 2021’ raised £147,215, which will go towards lifesaving research to help make prostate cancer a disease that men and their families no longer fear, and will support Prostate Cancer UK’s mission to stop the disease limiting lives.

The tour departed from London Victoria on Thursday, 2 September 2021, and finished at London Paddington four days later on Sunday, 5 September 2021. It had the support of the wider rail industry, together with 50 volunteers from within GBRf who gave up their own time to work as train drivers and stewards.

Southern donates bikes abandoned at their stations to support people in East Sussex.

“Yet again, our team have delivered another highly successful rail tour that has raised an amazing amount for our chosen charity partner, Prostate Cancer UK. More now than ever, funds are needed to support vital research into better tests and treatments for people affected by prostate cancer and we’re proud to contribute to this great cause.

“My thanks go to our charity rail tour team and the GBRf volunteers who gave up their own time to make this fundraising feat possible and provide much-needed assistance behind the scenes.”

“I’m amazed at what we’ve achieved as a team to raise over £147,000 for Prostate Cancer UK, a charity very close to my heart following my diagnosis with the disease a few years ago. The crucial funds raised by this rail tour will help in the fight against prostate cancer, which is a credit to the huge contribution made by our team of volunteers and support shown by the railway family.”

“We’re delighted and hugely grateful to be on this lifesaving journey with GB Railfreight, and are thrilled to learn that more than £147,000 has been raised from the brilliant rail tour and other fundraising activity. That amazing sum will help fund lifesaving research into the most common cancer in men as we go full steam ahead to do vital research into better tests and treatments. It’s also allowed us to continue to have hugely important conversations about prostate cancer – a disease affecting one in eight men in the UK, and one in four black men.

“We’re so thankful for the tireless support of John Smith and Paul and Tracy Taylor, who were huge driving forces in this project after Paul’s diagnosis with prostate cancer. On behalf of Prostate Cancer UK and all the men and families affected by this disease we thank everyone for getting on board.” An Auction of Experiences is being run by the Railway Benefit Fund, as part of their Railway Family...