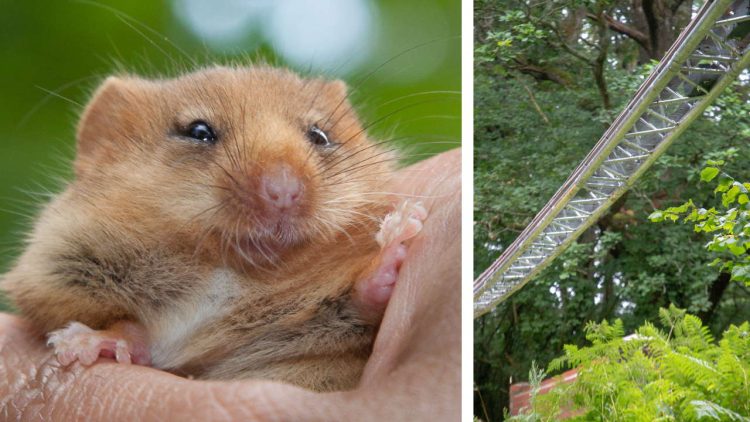 In a bid to save endangered wild hazel dormice from extinction, Network Rail engineers are providing them with their own miniature railway crossing.

Wild hazel dormice have declined by a staggering 51% since 2000 and have disappeared from 17 counties in England. This project aims to reverse the decline by establishing new dormouse populations in Lancashire, but the railway alongside Morecambe Bay currently separates the selected sites.

In a move by Network Rail and wildlife charity People’s Trust for Endangered Species (PTES), a new ‘dormouse bridge’ will be built next summer on the Furness line in Lancashire, and will be the first of its kind on Britain’s railways.

A mouse-sized climbing frame will be constructed over the railway tracks to connect dormice populations. It is hoped that the bridge will increase dormice numbers in this part of England by encouraging them to find food, look for a new mate, or find better nesting sites in the Arnside and Silverdale Area of Outstanding Natural Beauty.

The project will cost £80,000 and is being part-funded by Network Rail, with the rest of the money coming from donations to PTES. A 12-metre long shielded tree-top structure will be fitted on the side of an existing railway overbridge to provide protection from predators.

Network Rail teams are currently working with the ‘dormouse bridge’ manufacturer, Animex, on the best way to attach it.

Ecologists are investigating how the railway embankment could be improved as a way to encourage dormice to use the new bridge, which will allow them to move safely from one side of the railway to the other.

One of the main reasons for the decline in dormice numbers is the loss of quality woodland habitat. It is hoped that this new bridge will ensure a successful future for them in Lancashire.

Rory Kingdon, senior sponsor from Network Rail, said: “We’re delighted to be contributing £40,000 to this dormouse bridge over the Furness line to encourage the breeding of hazel dormice populations in danger of extinction, so they have a fighting chance to thrive for generations to come.

“Network Rail is committed to improve biodiversity and protect habitats for the future. In fact, this work directly aligns to a major aim of the recent COP26 summit in Glasgow – to protect the natural environment and contribute to the conservation of nature.”

Ian White, dormouse and training officer at PTES, said: “This year dormice made a welcome return to Lancashire when we reintroduced 30 individuals to the Arnside and Silverdale Area of Outstanding Natural Beauty. This new population has got off to an excellent start as we know at least twelve litters were born this year.

“PTES’ annual reintroduction brings dormice back into areas where they once lived, and we hope that this new bridge will enable two neighbouring populations to create a local meta population in the area, which will really to help bring this rare and beautiful species back from the brink.”

This Weekend: See the latest progress on the G5 steam locomotive – the last Open Day of 2021