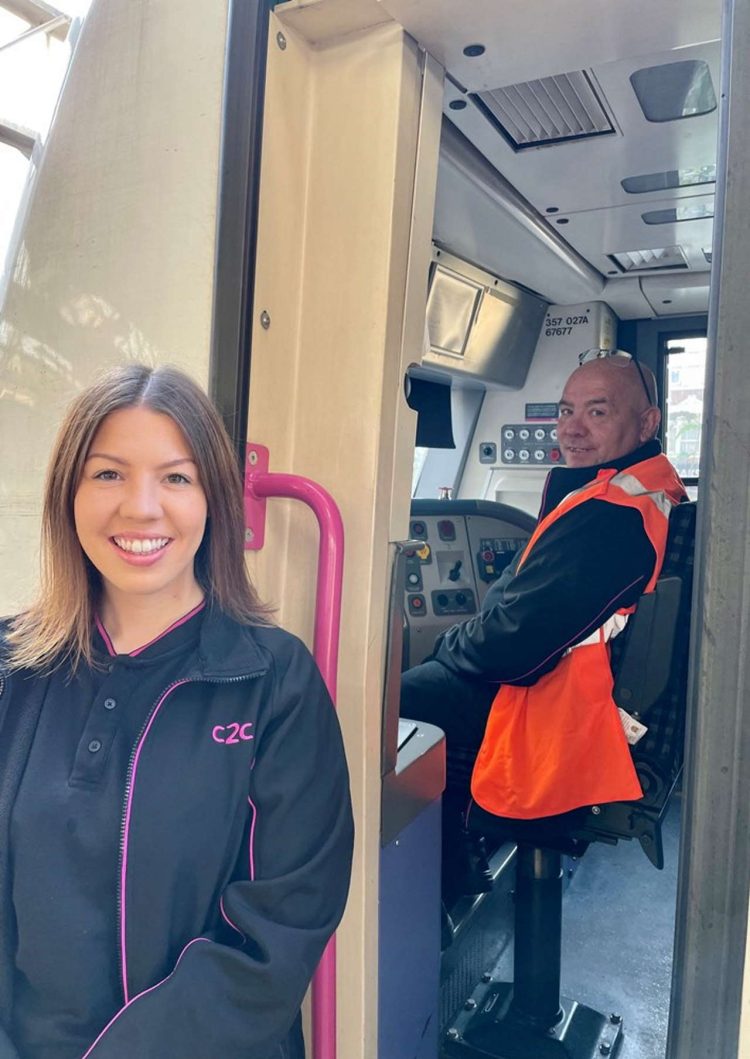 A driver training programme run by c2c has resulted in a trainee following in her father’s footsteps to become a mainline train driver.

“Street to Seat” is c2c’s driver training programme that enables anyone without prior railway experience to join the industry and train to become a driver.

Kayla Coles joined c2c in June. After passing many stages in the recruitment process, she was one of six successful applicants from over 1,200 to be selected for the Street to Seat course.

Kayla is following in the footsteps of her father, Tony Coles, who is also a mainline train driver. However, Kayla’s father’s to becoming a train driver was rather different.

Tony joined c2c in 2008, having previously worked in a casino but looking for a change of career. His driver experience started at East Ham as a shunt driver, before progressing to become a mainline driver in 2015.

His daughter also had different career aspirations. She studied for a Degree in psychology and a Masters in crime science, and was interested in becoming a police detective. However, the coronavirus pandemic caused Kayla to change direction to reconsider her future career choice. The first-hand knowledge gained from her father showed Kayla what a train driver’s role entailed, leading her to send off her application.

Kayla said: “Becoming a train driver was not the career I had planned when going to university, however, things change and I am so grateful to be on this journey to become a mainline driver.

“Hearing about the job from my dad and seeing just how much he enjoyed his job inspired me to go for it. When I got the phone call to say I had got on the Street to Seat course I felt so proud of this achievement and I know my dad did too!

“I am thoroughly enjoying my training and I look forward to the day I pass out and get my licence. I hope that this is the start of a long and successful career in the railway and I encourage anyone thinking about becoming a train driver to go for it!”

c2c Operations Training Manager Andrea Barclay said: “Due to Covid-19, flexible changes had to be made to our plan including setting up ‘bubbles’ to allow our drivers to carry on with their training. Even though some of the training had to be delivered in theory, the trainees adapted really well from the start and we could not have asked more from them.”

“Street to Seat is a brilliant opportunity for those looking for a change of career and the fact we’ve had such a wide range of people apply and be successful from a pilot, to a teacher and stay at home mum, is testament to just how popular train driving still is in 2021. We are hopeful we can recruit our next group of trainees to the programme late next year.” Over the Easter weekend, Network Rail continued work to upgrade the overhead wiring system on the c2c line...

c2c rail passengers urged to plan ahead this Easter