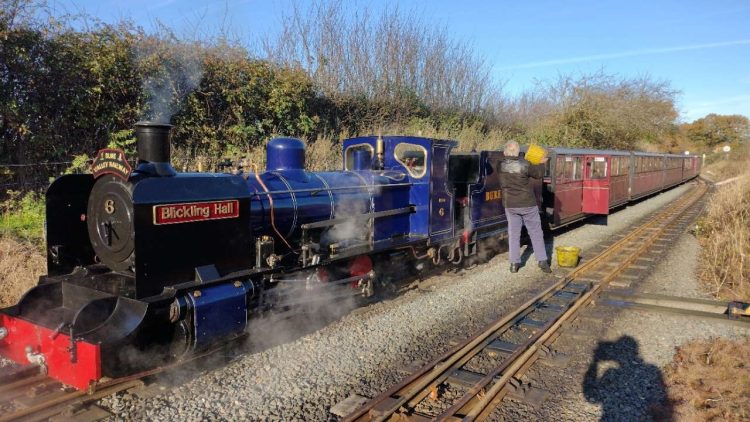 The Bure Valley Railway (BVR) has tested the use of bio-fuel under working conditions.

In June, the railway carried out trials to test the use of bio-fuel under normal operating conditions.

Steve Oates, the CEO of the Heritage Railway Association of which the Bure Valley Railway is a member, said: “With the supply of coal now under threat and global prices escalating, there’s an increasing desire among members to know if any form of bio-coal will actually happen on a large scale.”

The trials took place on Tuesday, 23 and Wednesday, 24 November, and were a collaboration between the railway, the Advanced Steam Traction Trust (ASTT), and Coal Products Limited (CPL) who manufactured the fuel.

The morning departures to Wroxham burnt Welsh coal from Ffos-y-fran open cast mine as a base comparator, whilst the afternoon departures burnt a variant of Ecoal50 developed by CPL based on feedback from the June trials.

The trials with No. 6 increased the load to 180% of the railway’s normal load to test the locomotive under the most-arduous combustion conditions that are found on the mainline or on Welsh narrow-gauge railways. In comparison, No. 1 was loaded to 113 % of what it would normally haul.

Using No. 1 allowed the fuel to be tested on a different locomotive which is smaller than No. 6 and also due for its 10-year overhaul in 2022.

The same driver, Scott Bunting, was the driver for both these trials and the June trials. On both days, the railhead conditions were not ideal, with leaf contamination, whilst there was also light drizzle on the Wednesday with No. 1. Both locomotives were working at the limit of their adhesion, even with the use of sanding, and were a test of the driver’s skill.

The test protocol was the same as in June, with the fuel in the tender weighed and the water consumption measured. Ash in the ash pan and the char in the smokebox were also weighed. Transducers connected to a computer in the lead carriage measured smokebox vacuum, which gave an indication of maximum combustion rate, exhaust performance, and speed.

ASTT produced the test protocol, provided the test equipment, and supervised the trials, and CPL attended the trials to observe first-hand how the fuels performed.

John Hind, Chair ASTT said: “The June trials were only on one locomotive and at moderate firing rates and showed that No. 6 steamed as well with Ecoal50 as Ffos-y-fran but Ecoal50 fuel consumption was 28% greater than Ffos. To extend the knowledge base we were keen to trial the fuel at heavier loads with greater combustion rates and on another locomotive.

“The ’gut feel’ on the day from the footplate crew was that with this variant of Ecoal50 the locomotives steamed adequately but not as well as with Ffos-y-fran. The initial thought is that this is because of unburnt fuel carry over especially at higher rates of working. We also saw clinker on one run. There now comes a period of more detailed analysis and discussion with CPL.”

Julian Martin, Sales Director at CPL Industries, commenting on their involvement with the trials said: “The two trials conducted at BVR clearly show that there is a great opportunity for manufactured smokeless fuels made using biomass materials to replace traditional coals used in steam engines. The latest trial provided some great learnings, and CPL’s R&D team look forward to continuing to work with the steam heritage sector to develop the ideal fuels. We’re extremely grateful for the support and feedback we’ve had from many within the sector and in particular the time the ASTT, BVR and HRA have given to this project. We look forward to trialling new ideas in the near future”.

The Heritage Railway Association will now liaise with CPL Industries as its R&D team works to develop the company’s products to produce a bio-fuel that can replicate coal sufficiently enough to secure heritage steam for future generations.