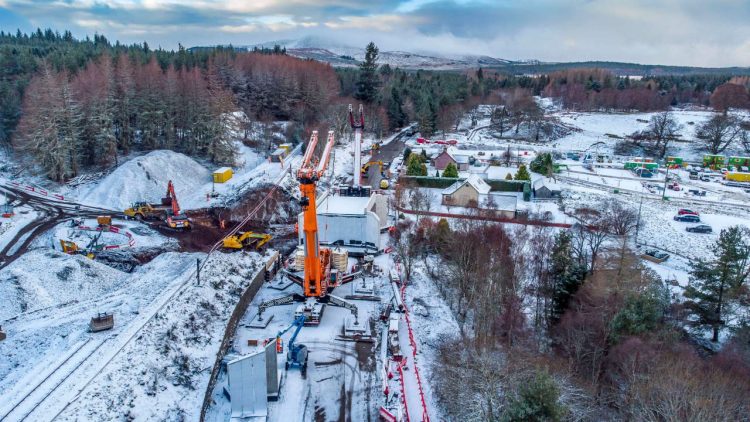 A bridge over the railway on the Highland Main line has been successfully demolished and replaced, despite the impact of Storm Arwen.

The bridge is at Lynebeg, between Perth and Inverness, and was replaced as part of work to make the A9 between Tomatin and Moy into a dual carriageway.

Network Rail engineers worked continuously for 78 hours from 23:20 on Friday 26 November until 05:40 on 30 November to demolish an 1884 Victorian masonry structure, replace it with a 660-ton twin-track concrete box structure, and reopen the railway in time for the first train on Tuesday morning.

The new bridge was constructed away from the railway in a nearby site compound over a 10-week period. A Self-Propelled Modular Transporter (SPMT) system was then used to transfer the structure several hundred metres along the B1954 before manoeuvring it and sliding it into its final position. Two 750-ton cranes then lifted seven concrete wingwalls, which were also constructed on site, into position.

The railway was fully reinstated and checked before re-opening to traffic early morning on Tuesday, 30 November.

Although the bridge was replaced because of the adjacent A9 road works, the new bridge will strengthen, safeguard, and future-proof the route for the weight and volume of traffic that passes over it daily. It also makes provision for any future double-tracking of the line.

At the same time as the bridge was being replaced, a 1200×800 mm pre-cast box culvert and a 900 mm twin-wall plastic culvert were placed under the track at two locations to accommodate the A9 works.

Work will continue for several weeks to complete the project, including cladding the concrete wing walls with stone recovered from the original stone arch bridge that was constructed as part of the Highland Main Line in 1884.

Minister for Transport, Graeme Dey, visited the site following the complex operation to see first-hand the new rail bridge. He said: “The success of the Lynebeg rail bridge installation marks a significant milestone for the A9 Dualling: Tomatin to Moy project, as the first tangible improvement to the transport infrastructure as part of the project’s advance works.

“Not only is this new structure safeguarding and improving connectivity on Scotland’s Highland Mainline, these works will help to deliver the ongoing A9 Dualling programme and will enhance the local infrastructure for the benefit of the surrounding communities.

“I would also like to thank all passengers whose travel plans were affected by these works and the local community for their patience during the construction of the new bridge.”

Billy McKay, Network Rail’s Programme Manager for the Lynebeg bridge replacement works, said: “We are delighted that the work to replace the bridge at Lynebeg was completed successfully and the railway re-opened to traffic as planned – despite terrible weather conditions and the impact of Storm Arwen.

“The installation was complex due to requirement to remove the existing railway infrastructure including cabling, track, and the embankment, before the concrete bridge could be pushed into its final position. And all against the clock due to the need to reinstate and re-open the line to traffic at the end of the possession”

“As well as upgrading the railway bridge, the team is delighted to have played a part in supporting the future dualling of the A9”.