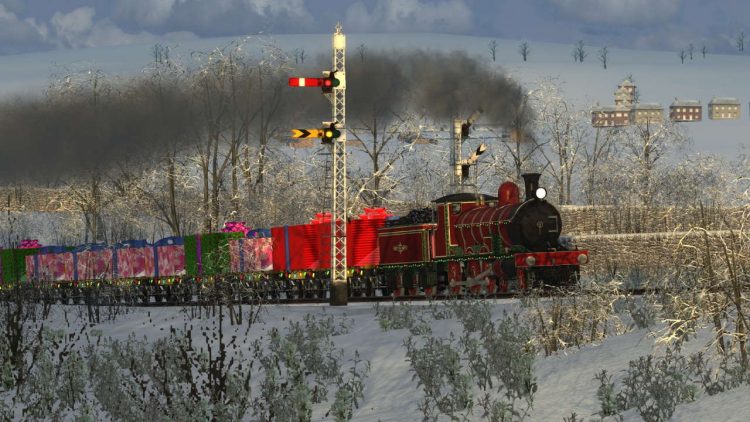 We have once again got to the time of year where we wish all of our readers, customers and RailAdvent Plus Members a very Merry Christmas.

We hope that you all have a fantastic year, and we must thank you all for the support throughout the year, whether you have purchased an item from our store, subscribed to RailAdvent Plus, or even left a comment on an article, we appreciate everyone’s support.

We will bring you some very exciting news on our projects for 2022 in the coming weeks, however today we can bring you news on an exciting project which we are working on with Blast Pipe Productions.

Along with Blast Pipe Productions, Donington Reskins, Peppercorn Workshop, we are working on The North Pole Railway Project.

The North Pole Railway Project is a Train Simulator Community-wide project that will see a Christmas themed fictional railway created with a number of rolling stock assets to accompany the route.

This pack will be released as a payware pack, but all profits will be donated equally between Mind, Calm and Samaritans, all charities that help people who are struggling with their mental health.

The pack will be released on the 25th December 2022 – but we can’t do it alone! We are calling all route builders, asset makers and reskinners to get involved and to make this a truly special pack.

If you are interested in getting involved, just contact Blast Pipe Productions, Donington Reskins, Peppercorn Workshop or RailAdvent for more information.

Sam Steventon from Blast Pipe Productions explains how the idea came around: “I started working on a festive reskin for Christmas last year, but was unable to finish it in time to be released at Christmas. So over the year, whilst I put the finishing touches on it, I thought it would be a good idea to reskin some wagons or coaches to go with it, so there was a nice matching set it could run with. Then, I thought it’d be nice to have a christmassy route to run it on too. As the year progressed, I pretty much forgot about it, until it started getting closer to Christmas again.”

“After witnessing and being involved in several falling outs in the TS community, I was feeling pretty glum, and I knew a few others were similarly affected. It was about this time that I connected the dots and thought hey, why not make the Christmas idea into a large scale community project, to highlight the positives of the TS community, and raise funds for a charity or 2 whilst we’re at it? So, I messaged a few people I’d worked with before and pitched the idea to them, and they loved the idea. So we had a chat and decided on some charities, ground rules, and aims for the project, and set to work. So, the charities we chose are MIND, CALM, and Samaritans, all of which are charities aimed at helping people with mental health difficulties, to try and reduce the amount of people suffering from depression and reduce the amount of people ending their own lives. Some of us have personal connections to these charities, so we’re determined to do a good job to raise funds for them.

“In terms of the actual project, we’ve decided we want to create a fictional railway set at the north pole, set in the steam era, based on Victorian towns and cities, to act as a hub for santa and his elves. We want to include a logging industry, mines, docks, tramways, passenger routes, a whole variety of industries to cater for everything that Santa and the elves may need to make and export presents. As well as this, we’ll be creating a variety of Christmas themed reskins to run on the route, and to cater for all the industries present on the route. We’re hoping that we can get lots of members of the train sim community involved, even if just a small contribution, to help make it something really special and high quality that people will be able to enjoy, and eager to get.”