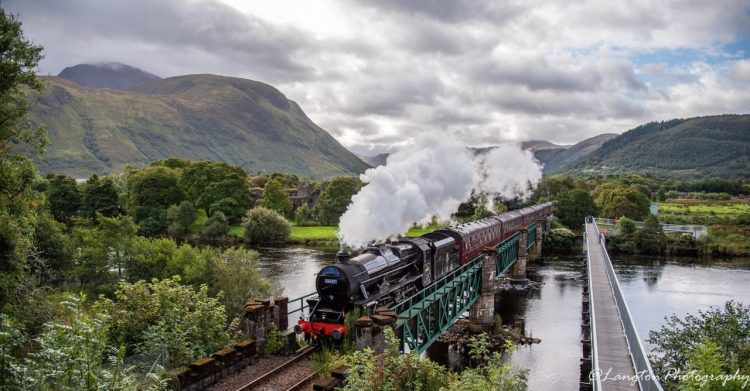 Details for 2022 Season of The Jacobite has been released by West Coast Railways.

The stunning rail trip will return next summer running between Fort William and the fishing port of Mallaig and hauled by K1 62005 and Black 5 45407 locomotives.

The steam-hauled journey, made famous by the Hogwart’s Express in the Harry Potter films, will be running each morning from the 4th of April right through to the 28th of October 2022. Afternoon services will also run each day starting from the 2nd of May until the 30th of September 2022.

The Class K1 locomotive was designed by A.H. Peppercorn was built in Glasgow in 1949 and is perfect for this heavy work and carries the name “Lord of the Isles” which was originally given to a K4 that regularly worked the West Highland routes.

The hardworking and reliable former LMS Black 5 locomotive has been renamed “The Lancashire Fusilier” and is based in Bury and each summer works the Jacobite route and has done so for many years.

Many of the Jacobite coaches were actually used in the Harry Potter films, all of which are ex-British Railway’s 1960’s Mark 1s. The brake is a composite of brake, first and second class compartments.

First-class is located in open coaches (FOs) rather than compartments, and second class TSOs (Tourist, Second, Open in railway parlance)

Standard return tickets cost £52 for adults and £30 for children.

For further information please visit the West Coast Railways website. All the details of The Jacobite 2022 have already been added to our Mainline Steam Calendar