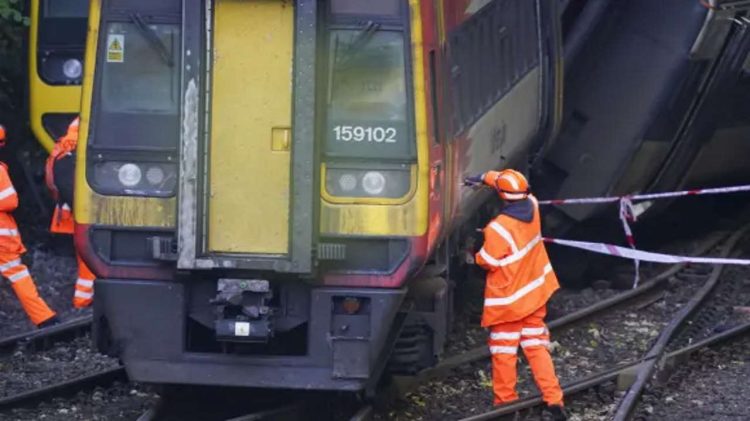 The RAIB have now released further details, which can be read here

Early findings from the Rail Accident Investigation Branch and Network Rail suggests that low adhesion has played a key part in causing the collision.

On Sunday 31st October, the 1708 Portsmouth Harbour to Bristol Temple Meads and the 1720 South Western Railway service between London Waterloo and Honiton were involved in a crash at Fisherton Tunnel in Salisbury.

A number of people were injured, mostly classified as being walking wounded, and some were taken to hospital for assessment. However, as we reported yesterday, the driver is still in hospital with life changing injuries.

The RAIB’s statement says that from the initial evidence, the GWR train from Portsmouth was protected by a red signal that the SWR train was approaching.

On approach, the SWR train driver applied the brakes but as it approached the red signal, the train was unable to stop due to low adhesion and struck the side of the GWR train at an angle which meant both derailed and ran alongside one another into the tunnel and just beyond the junction.

Initial investigation findings are expected to be released by the RAIB later this week.

Martin Frobisher, Network Rail’s safety and engineering director, said: “Sunday’s accident was incredibly frightening for everyone involved and our thoughts are with everyone injured or affected in any way.

“Initial findings suggest that low adhesion played a key part in causing the collision. It’s an issue that affects railways across the world and is something that we, and our train operator colleagues, work hard to combat – so that we can run trains safely and reliably throughout autumn, and why incidents such as the one in Salisbury at the weekend are incredibly rare.

“We will continue to work closely with investigators to understand what happened and what more we can do to help prevent this happening again.”

“A team of RAIB inspectors arrived on site on Sunday evening and were joined yesterday by additional inspectors and our support team. We are working alongside partner organisations including the Office of Rail and Road (ORR) and BTP. Our investigation is progressing well.

“Yesterday our focus was on evidence retrieval, we have been working with Police scene officers to examine the train. We have also undertaken a close examination of the track and signalling in the area and started to talk to those involved. Analysis of downloads from the trains’ data recorders, electronic data from the signalling system and CCTV imagery is ongoing.

“From the initial evidence we have collected, we know that that the passage of the Great Western train travelling from Eastleigh across Salisbury Tunnel Junction was being protected by a red signal. At this junction, trains coming from Eastleigh merge with those from Basingstoke, so the South Western service coming from Basingstoke was required to stop at that signal.

“Unfortunately, it did not stop and struck the side of the Great Western train at an angle such that both trains derailed and ran alongside each other into the tunnel just beyond the junction.

“Initial evidence indicates that the South Western train driver applied the brakes as it approached the junction and the red signal, but the train was unable to stop before passing the signal.

“This evidence suggests that the most likely cause of this was wheelslide, almost certainly a result of low adhesion between the wheels and the track.  We are continuing to pursue this as a line of investigation amongst others.

“In consultation with other parties, we continue to work with the railway recovery engineers to ensure that the site is handed back in the shortest time possible.  We intend to begin releasing parts of the site back to Network Rail later today.

“Later this week we’ll be releasing the initial findings of the investigation, these will be publicly available on our website.”

Responding to the Rail Accident Investigation Branch’s (RAIB) statement on the Salisbury rail incident, a South Western Railway spokesperson said: “RAIB’s statement on their initial investigation into the train collision near Salisbury on Sunday points to low adhesion between the wheels and the track as the most likely cause. Their early assessment shows the South Western Railway driver reacted correctly to the signals by braking to slow the train down.

“While the investigation has a long way to run, these initial findings are helpful to stop speculation and focus attention on the evidence about the likely cause of the collision.

“Our thoughts are with all those caught up in this serious accident and we will continue to cooperate fully with the relevant authorities as they continue their investigations.

“We want to pay tribute to our driver who was injured on Sunday night. He is a deeply respected colleague, who has over 50 years’ experience of driving on this route and an excellent professional track record. All our drivers are regularly assessed to the highest standards and he has fully satisfied all requirements.

“Initial findings indicate that the driver acted in an impeccable way in a valiant attempt to keep his passengers safe, staying at the controls throughout. We thank him for his actions and we wish him a speedy recovery as he continues to be treated in hospital.”