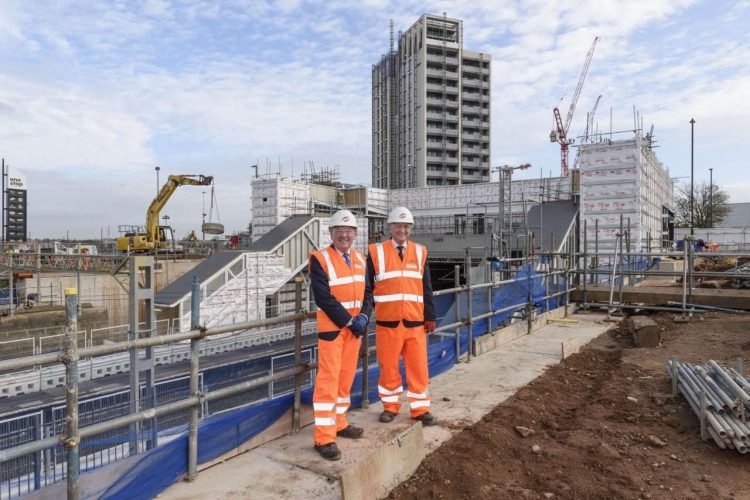 The huge project is being led by Transport for West Midlands (TfWM) which is the transport arm of the West Midlands Combined Authority (WMCA) with work set to complete and the station open for passengers as soon as Spring 2022 and in time for the Birmingham 2022 Commonwealth Games.

Bob Sleigh, who is Deputy Mayor of the West Midlands visited the construction site with Birmingham City Council Cllr Ian Ward for the ‘topping out’ ceremony which marked the installation of the roof.

The previous station was dated in design and has now been cleared to make way for the brand new purpose-built structure which will become a new gateway for the Alexander Stadium, which is one of the main venues for the Games.

The new station is set to bring a more welcoming, accessible and efficient facility for the residents of Perry Barr.

“This new railway station will be a great asset for Perry Barr, the Commonwealth Games and the city as a whole. It is fantastic to see such rapid progress being made and meet some of those working on site. It is truly taking shape.

“The new station, combined with the development of the Sprint bus route, a new bus interchange and new cycling routes will give thousands of residents more choice for their journeys around the region.“

As well as the major redevelopment of the station, the bus interchange outside One Stop Shopping Centre which is next door, will also see redevelopment and further investment in the Sprint bus route on the A34 which will include new cycling and walking routes.

Most of the funding for this project has been provided from WMCA, Birmingham City Council, Greater Birmingham and Solihull Local Enterprise Partnership and the Ministry of Housing, Communities and Local Government (MHCLG).

“Connectivity is key for all communities, not only to reduce congestion on our roads and support our economy as we recover from the Covid 19 pandemic, but also to help us meet our climate change targets.

“So this investment in Perry Barr, through this new station and the wider £700 million redevelopment of the area, is crucial to ensure Perry Barr has a lasting legacy of better public transport links and infrastructure for the future.”

“In the last decade, GBSLEP through its unique triple helix structure of public, private and academic partners has made targeted investments to create better places for our communities and drive inclusive economic growth.

“Our £3.5 million funding into Perry Barr is contributing to a ‘once-in-a-’generation’ transformation of this area in Birmingham.

“The new station, bus interchange and wider regeneration will not only serve the needs of local people and businesses through providing sustainable ways to travel around but is an international gateway when visitors will be arriving for the Commonwealth Games next year.”

On completion, the new station will be fully accessible and will see a new ticket office, toilets, baby changing facilities, lifts, new stairs and platforms with the contemporary design being a welcome change to the unattractive earlier station building.

The region has wider plans for rail which this huge investment is forming just part of, and will see the building of six new stations alongside the reopening of Camp Hill and Wolverhampton to Walsall lines for passenger services. This ongoing development will work towards the West Midlands target of being a net-zero carbon region by 2041.

The rebuild of Perry Barr Railway Station is being carried out by Galliford Try under contract with TfWM, and is part of a total package of over £700m of regeneration investment for the Perry Barr area.