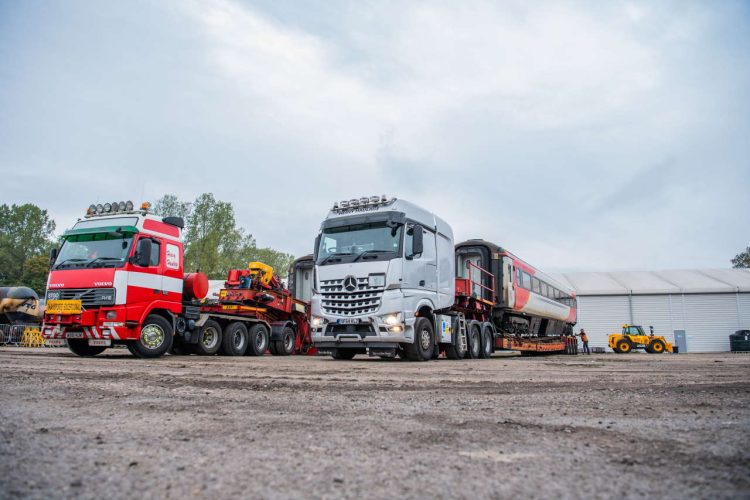 Porterbrook has donated two redundant railway carriages to a primary school at Waltham Abbey in Essex.

Ex-East Coast Mk.III carriages that used to operate between King’s Cross and Edinburgh have been donated by train leasing company Porterbrook to Upshire Primary Foundation School at Waltham Abbey where they will be used as a library and a classroom. The vehicles will also be made available for use by the local community.

Rail Support Services (RSS) delivered the carriages to the school by road from Long Marston in Warwickshire. In a delicate operation, they were installed on specially prepared plinths that are equipped with short sections of track on which the coach bogies rest.

Andrew Goodman, managing director of RSS explained that the final stage of the journey and installation of the coaches “had its challenges” as each carriage is 23m (75ft 6in) long and weighs over 33 tonnes,

He says: “Moving loads of this length is straightforward enough on motorways and main roads, but manoeuvring them through suburban streets with width and weight restrictions needs a lot of planning. No-one ever expected loads of this size to be delivered to a school!

“Some road signs, a fence and a gate had to be removed before we could reach the site. To make sure that the delivery would be trouble-free on the day, in advance we completed a ‘dry run’ with an empty transporter.”

To limit damage to the grassed areas of the school grounds, RSS installed protective matting. The coaches were first offloaded on to temporary track, before being traversed sideways into position using ‘MFD’ hydraulic lifting gear. The concrete plinths on which the vehicles now rest were specially installed to overcome problems with the soft ground at this location.

Adds Andrew Goodman: “It’s good to see the coaches being put to such an imaginative educational use. One is to become a library and the other an unusual classroom and the school expects to take about six months to convert them to their new use.”

RSS provided the transport and installation ‘at cost’. Andrew Goodman added: “This was a collaborative effort between a number of organisations to ensure the vehicles arrived safely. It has been such a worthwhile project.”

Season ticket holders given chance to win back cash by Northern