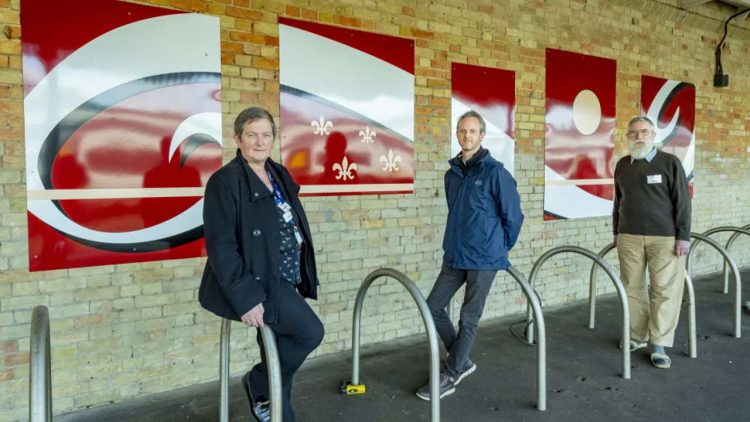 Local artist Steve Messam has re-imaged the famous image to highlight King’s Lynn’s claim to fame as the home of Campbell’s first factory outside the USA, which was built in 1959.

Groundwork East has carried out art or landscaping projects at 20 stations. The charity commissioned Steve to produce a suitable artwork for display at King’s Lynn, one of the charity’s 20 chosen stations.

King’s Lynn station opened on 27 October 1846, and in its 175th anniversary week local passenger and community representatives met Great Northern and Groundwork East staff at the station to welcome the artwork, and to celebrate the completion of a package of improvements that local residents had suggested to the rail company.

The improvements are part of a network-wide, multimillion-pound programme being carried out by Great Northern’s parent company, Govia Thameslink Railway. Over 250 stations are set to benefit, and King’s Lynn has seen new landscaping, six new benches, information screens, toilet improvements, and a mural in the waiting room, as well as Steve’s Campbell’s soup tin artwork.

Karen Gregson, GTR’s area manager, said: “This is one of more than 200 works of community art we’ve commissioned in the past year as part of a network-wide improvement programme. I’m delighted to thank all our local partners who have contributed so many ideas and so much effort into helping our stations serve their customers and communities better. At King’s Lynn we’re especially grateful to Steve Messam for creating this unique and distinctive artwork as a symbol of the town’s history and identity.”

John Grant, Chair of the Fen Line Users Association, said: “”It’s great that stations are being given a friendlier, more ‘lived-in’ feel. Along with the longer trains we now have on our line, it will help attract more people to rail travel, away from less environmentally friendly forms of transport. This artwork is in enamel, like the advertising signs that were a feature of stations a hundred years ago.”