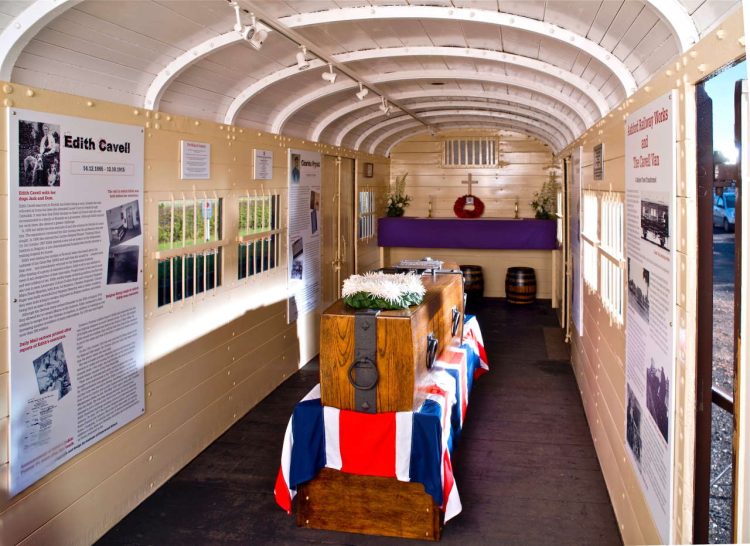 The Kent & East Sussex Railway will hold a short act of Remembrance at Bodiam station on Thursday, 11 November.

Bodiam station will be open from 10.30 am for those wishing to take part, and all are welcome.

The ceremony will begin just before 11 am when the two-minute silence will be observed, and will be led by Rev Canon Christopher Irvine, Priest-in-Charge of the Parishes of Bodiam and Ewhurst.

Following the ceremony, the Cavell Van will be open for viewing.

The Germans shot nurse Edith Cavell for helping escaped British prisoners, and it was in her honour that railwaymen gave the van its name.

She was carried in the van for part of her journey to her final resting place in Norwich Cathedral.

Also carried in the van was Charles Fryatt, a Channel ferry captain who was executed after being falsely accused of trying to sink a submarine.

In 1920, the Cavell Van saw service for the third time when it carried the bodies of three unnamed soldiers from the First World War on their final journeys. One of the soldiers was selected anonymously to be the ‘Unknown Warrior’, his sacrifice representing the hundreds of thousands of British soldiers who had not returned from the Great War.

The soldier’s return was a huge event attended by the Royal family and members of the Government, and he was buried in a grave in Westminster Abbey. One million people visited his grave during the following week.

David Nibloe, Trustee of the Kent & East Sussex Railway and local Ewhurst resident, said: “We are so privileged to have this unique piece of history preserved on the railway and exhibited at Bodiam station. The stories of these heroes are a prompt to us all to pause and reflect on what was sacrificed during times of war to secure the freedoms we all enjoy today”.

The Kent & East Sussex Railway was built by Holman F. Stephens and was the first light railway opened in Britain under the Light Railways Act of 1896.

Today it is one of Britain’s most loved and original heritage railways, running for over 10 miles from Tenterden in Kent to Bodiam in Sussex.

Carbon emissions cut with the new trains in East Anglia