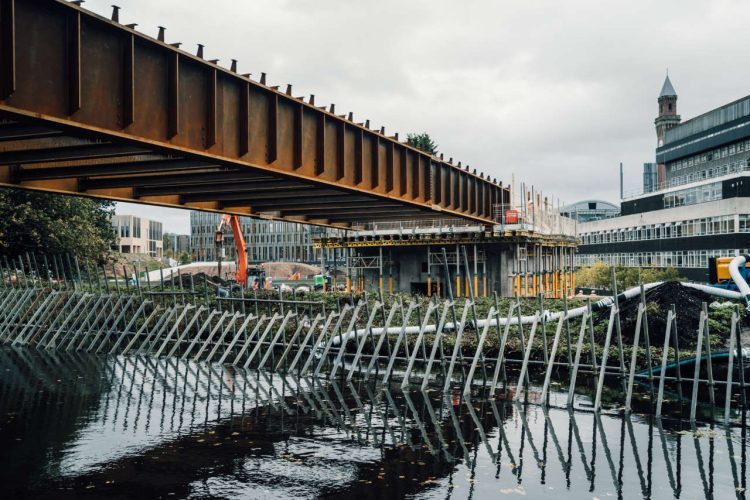 A 48m temporary cofferdam was put in place to allow the essential repair work to go ahead, creating a dry working environment which allowed the work to go ahead safely and also allowed for the relocation of fish and aquatic life present in the water prior to pumping it out. Following this procedure, specialists were able to carry out the repointing work alongside other improvements to the supporting canal wall.

The canal footbridge is a major feature of the University railway station redevelopment, as it will provide direct access both to and from the station from the university campus.

Ongoing work is being carried out by Transport for West Midlands (TfWM), which is part of the West Midlands Combined Authority (WMCA) and its partners to create develop a new fit-for-purpose station with up to date facilities with the ability to handle 7.2 million passengers a year.

TfWM have committed to the life-extension works on behalf of the Canal & River Trust as part of the agreement to install the new footbridge.

“Once complete the new station will provide a much-improved environment for visitors to the University and QE Hospital – including a convenient new bridge over the canal.

“But it is important that while building this fantastic new station we look after the local environment which is why we agreed to carry out this important work to strengthen the bank and extend the life of this historic canal.”

SLC Rail are working together with AECOM as Rail Delivery Partner with Volker Fitzpatrick LTD being the Principal Contractor for the project.

“There has been a lot of work involved in getting these repairs arranged and we’ve made sure that there has been minimal disruption for canal users, whilst also protecting fish and other aquatic life.

“We’ve been liaising very closely with the Canal & River Trust and other interested parties and ensured that this fits in with our ambitious schedule.”

This ongoing project is just part of the region’s extensive plans to build six new stations and reopen Camp Hill and Wolverhampton to Walsall lines for passenger services and will also help towards the West Midlands’ target of becoming a net-zero carbon area by 2041.