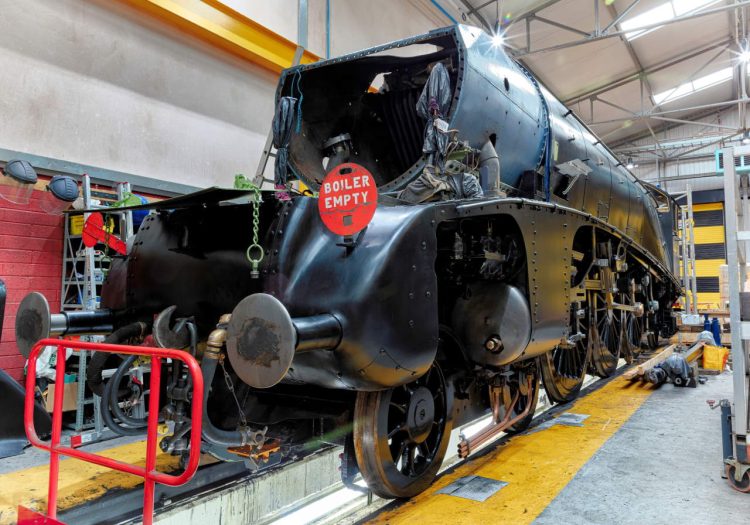 Back in July, the National Railway Museum told the trust that they would have to move on and complete the overhaul elsewhere.

The trust soon confirmed that 60007 would be completed in Crewe with the help of Locomotive Services Ltd, which 60007 Sir Nigel Gresley will be operated by on the mainline, once completed.

Fast forward a couple of weeks to late August and Sir Nigel Gresley was rolled out of the National Railway Museum and into the sun in a new temporary LNER Wartime Black livery, which was a protective layer for transit to Crewe.

Using LSL Class 37s, the LNER A4 was hauled a short distance from York NRM to Holgate Engineering. The locomotive was parked for a few days awaiting movement to Crewe by road.

An overcast day with sunny spells was the weather for the move, with Rail Support Services being used to move the locomotive to Crewe.

Talking about the move, Darrin Crone, Locomotive Engineer, told RailAdvent “Despite the torrential rain delaying the transports, everything went off without any problems. I would like to say a big thank you to Network Rail at Holgate Engineering, RSS transports and LSL in Crewe for all their assistance and a special thank you to all of the SNGLT volunteers who have made this possible.”

Now at Crewe, the streamlining fitted to the locomotive for the move to Crewe has been removed, as has the cod mouth.

This has been removed in preparation for the main steam pipes to be fitted, which should be completed in the not too distant future.

London shops, bars and restaurants face closure as a knock-on effect of the slow return of commuters following the pandemic