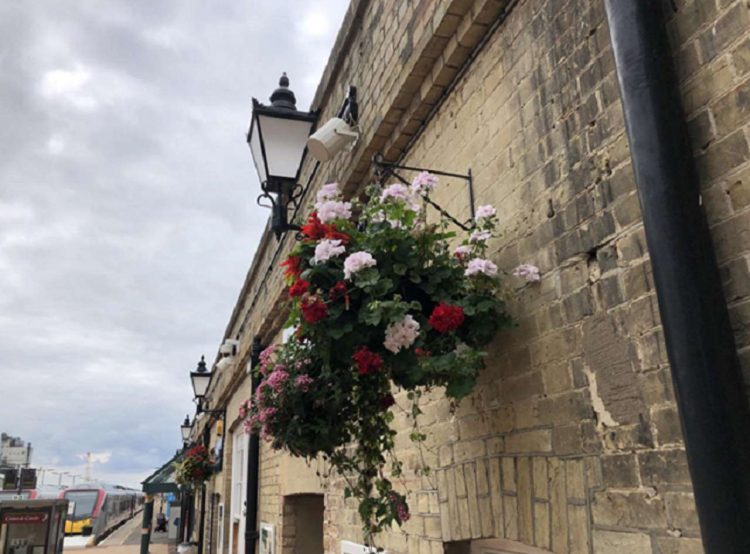 The seaside railway station has been glowing with bright and colour flowers once again this year due to a joint project with Wherry Lines Community Rail Partnership, Lowestoft Central Project and Lowestoft in Bloom.

The three voluntary organisations have been working together for three years now to furnish the station with colour. The station is decorated with 19 hanging baskets, 21 tubs and 2 converted boats which have been repurposed as planters, in a bid to make a welcoming environment for passengers and visitors.

For 2021 the team have used a new organic peat-free compost and avoided using pesticides which will help to support their joint ambition to become more environmentally friendly.

As spring this year was unfair to those with green fingers, the planting started later than usual with the Wherry Lines Community Rail Partnership funding the new plants, the boats received a freshening up and the baskets were made up using the new organic peat-free compost by Lowestoft in Bloom. Volunteers from the Lowestoft Central Project then undertook the installation along with the ongoing maintenance work.

Future plans are also underway to create new wildlife-friendly areas around the station.

Jacqui Dale from the Lowestoft Central Project said, “Lowestoft Station is quite exposed to both wind and sunshine and it has taken a few years to get the mix of planting right. We have had so many positive comments about the floral displays this year from both visitors and regular users of the station. We are hoping that these displays will continue to look as good as we move into autumn and are now preparing our winter planting scheme.”

Debbie Blowers from Lowestoft in Bloom added; “We are pleased to continue our relationship with the Lowestoft Central Project and Wherry Lines Community Rail Partnership. It is a privilege to work with the team, helping to create some floral splendour at our town’s historic station and we very much hope to continue our joint initiative in the future.”

Alan Neville, Greater Anglia’s Customer and Community Engagement Manager, said, “I would like to thank everyone involved in this project for creating such lovely displays at the station, which will help to welcome people back as they return to travelling by train.”