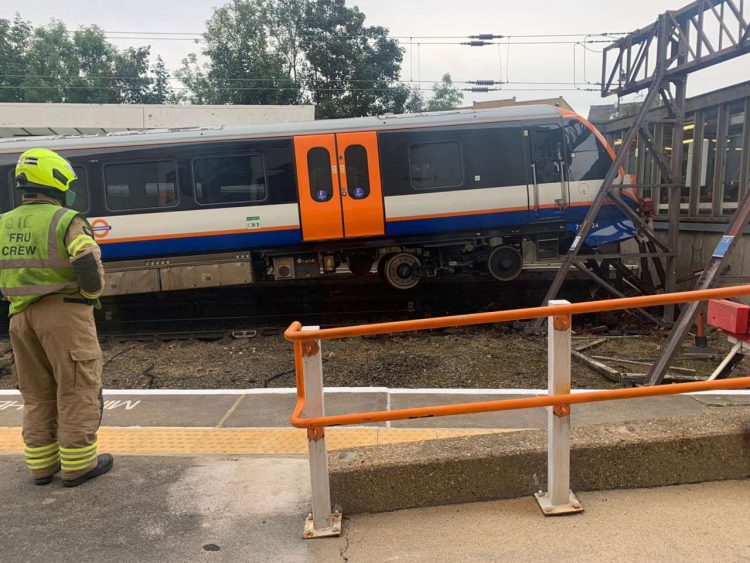 A London Overground train has run through the buffer stops at Enfield Town this morning, the British Transport Police has confirmed.

Reports began to come in around 8:20 this morning stating that a train had hit the buffer stops at Enfield Town.

The train driver and a passenger have been checked over by paramedics at the scene.

The driver has had a routine breathalyser test and has blown negative.

We are awaiting more information on this incident, but police remain at the scene as investigation work takes place.

A spokesperson for the British Transport Police told RailAdvent: “Officers were called to Enfield Town at 8.20am following reports of a train hitting the buffer stops at the station.  Two people, including the driver, were checked over by paramedics at the scene. As is routine, the driver has been breathalysed and blew negative. We remain on scene while enquiries continue.”

A spokesperson for The Office of Rail and Road has said “We’re aware of an incident at Enfield Town railway station and we are sending two ORR safety inspectors to assist emergency services and help establish the full circumstances surrounding this incident.”

A London Ambulance Service spokesperson said “We were called this morning to reports of a train derailed at Enfield Town railway station. We sent a number of resources to the scene: including HART and Tactical Advisors. Two people were assessed at the scene for minor injuries, but they were not taken to hospital.”

Ellie Burrows, Network Rail’s route director for Anglia, said: “At approximately 8:20 this morning a train hit the buffer stops at Enfield Town at slow speed. The driver is being treated for shock and there are reports of a few minor injuries. Emergency services including the British Transport Police are on site and an investigation is underway.”

The London Fire Brigade said “Firefighters have attended a derailed train at Enfield Town station this morning. Crews carried out a systematic search of the train to ensure no one was trapped. Two people have been treated for minor injuries by London Ambulance crews”

We are awaiting a statement from Transport for London. Passengers travelling on the District line platform at the station will now get travel information via the 117-year-old...