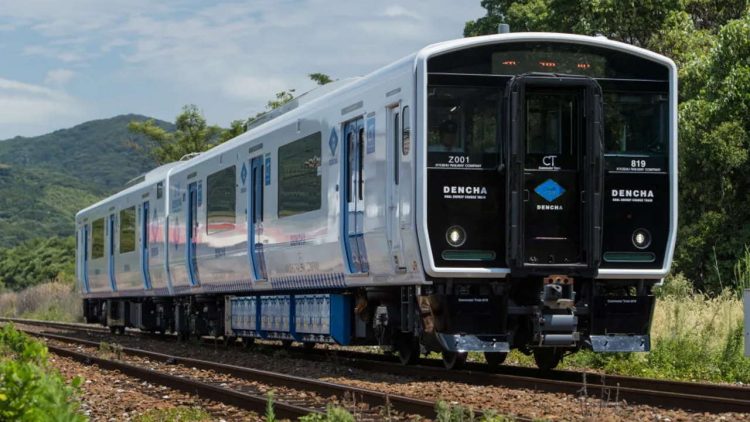 The DENCHA trains are the world’s first battery-powered train charged by AC overhead lines and have been awarded the Japan Railfan Club’s Blue Ribbon Award.

The fleet of 18 trains have had a substantial impact for the Kyushu Railway Company’s environmental strategy by reducing CO2 emissions by 2.7 million kg over a five year period.

The DEC819 series trains have been branded DENCHA and undertook its very first journey between Wakamatsu and Orio during October 2016, since then the trains have seen more than 5 million kilometres covered for passenger services in the northern Kyushu area.

Due to the success of the DENCHA trains Hitachi Rail has been able to expand and offer battery train solutions throughout the world with the innovative technology being a key component in their own decarbonisation strategy and their ongoing commitment to alternative fuel transport.

The cutting edge battery technology used in the DENCHA trains means it can run in two modes, one which is on electrified areas of the network where it runs powered by the overhead AC power lines. The second mode is on non-electrified areas where it uses its battery mode, the trains also include a low energy loss main circuit system which reuses regenerative energy from braking and this allows fast charging whilst standing in stations.

The Kyushu region of Japan introduced the DENCHA fleet to replace diesel trains which were at the end of their working life. As the line has a low traffic volume, electrification throughout was not seen as a viable option especially as the innovative battery technology offered reduced fuel costs alongside a duty to provide a “friendly to the future of people and the planet”.

Hitachi Rail are the principal sponsor for mobility for the COP26 UN climate change conferred and has designed and built Masaccio regional battery trains for Italy, battery trams for Florence and also has proposed trials of an intercity battery hybrid train for the UK.

Hitachi Rail are also part of a partnership with JR East and Toyota and are working on the development of  hybrid (fuel cell) test vehicles which are called HYBARI and will be running during 2022 in Japan.

“This battery solution provides the blueprint for thousands of kilometres of unelectrified railways around the world. Through battery control technology, Hitachi Rail is determined to help decarbonise more transport networks while continuing quality passenger services.”

Travel advice from Northern ahead of Barnsley v Sheffield United