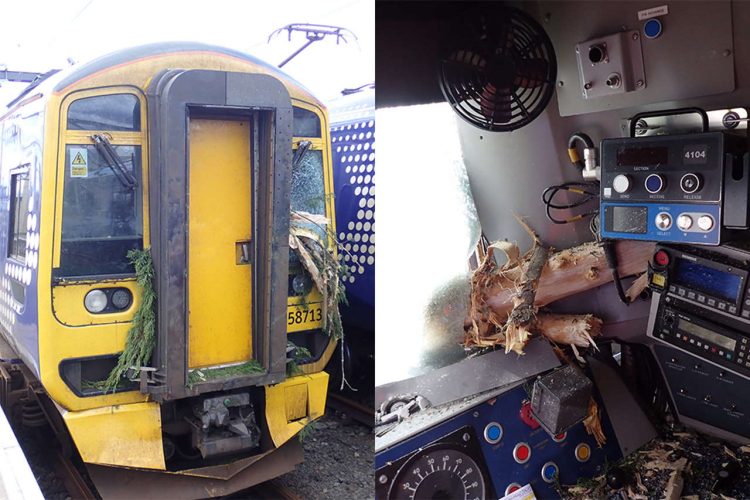 The RAIB has released its reported after a ScotRail Class 158 was involved in an incident involving a fallen tree.

On Friday the 21st of May, train 2L71 was operating the 16:39 ScotRail service which runs from Perth to Dundee.

At approximately 16:47hrs the train hit a fallen tree whilst travelling at 63mph on the line between Barnhill and Errol and close to the village of Glencarse.

At the moment the tree came into view the train was travelling at 74mph and despite the driver applying the emergency brake hit the tree seven seconds later.

The cab of the class 158 unit was penetrated by the tree, causing the driver injuries to his head and arms. Onboard were 28 passengers and the conductor who were all unhurt during the accident. The driver’s window, inside the cab and the outer skin of the two side windows were damaged.

Once the train had stopped, both railway staff and passengers gave first aid treatment to the driver who was taken to hospital by ambulance. Later, the train was moved back to Perth, and the passengers were able to carry on with their journeys.

The train previously travelling the route had passed the accident site an hour before with no issue and the tree falling in the period between whilst the weather was dry and a light wind was blowing from the northeast, however, there had been light rain earlier during the day.

On examination of the remains of the tree, which was a Monterey Cypress and had been growing from land outside the railway boundary and approximately 11 meters from the closest rail. The tree trunk had fallen years before and was mostly dead and rotting at the root, with branches growing upwards from the fallen trunk.  The branches fell and caused the obstruction on the railway with their weight overpowering the constraining effects of the roots, which rotated the trunk as it lay on the ground. No evidence has been found that the branches fell because of any effect from unusual weather.

The tree was positioned on a narrow strip of land which is located between the railway and a slip road forming a junction for the A90 Perth-Aberdeen dual carriageway and local roads. The junction was built on open land in 1973  and it is thought that trees were planted to help with noise pollution from the road for local residents.

Network Rail has a strategy for inspecting and managing trees within falling distance of railway lines which aims to identify ‘hazardous trees’. A hazardous tree is determined by Network Rail as ‘a tree, which may have significant defects, that poses a risk to either the railway or a third party’. Network Rail undertakes vegetation inspection by foot every 36 to 44 months to find hazardous trees, also inspections are undertaken from train cabs every 12 to 16 months.

Network Rail’s last inspection by foot at the site of the accident took place on the 3rd of September 2020 and found that several line side trees in that section fitted the criteria of high risk to the railway and that owners should be notified of the inspections results with a re-inspection taking place within the year. Network Rail tried to find out if a contractor managed the land which is owned by Scottish Ministers but was unable to establish responsibility and no action was taken to make the trees safe before the accident in May 2021. Transport Scotland has also said that the land where the tree fell from is out of the boundary for the trunk road network that manages it and was also unable to find anyone responsible for management of the land.

From the railway side of the boundary fence the base of the tree which feel was hidden from sight by undergrowth. The part of the tree that could be seen over the fence would have seemed to be healthy making it very hard for Network Rail staff to pick up that there was a risk of it falling and from the inspection which took place in September 2020 it is unclear as to whether the tree was actually identified. After the accident Transport Scotland has ordered the company which operates the trunk road network to inspect the area on their behalf and to undertake whatever action is needed to keep the land safe including removing any further trees that could potentially cause risks.

Similar incidents have been recorded in the past, a Rail Accident Investigation Branch (RAIB) report from August 2011 details a collision between a train and fallen tree close to Lavington in Wiltshire which took place on the 10th of July 2010 and caused considerable damage to the train. Just like the accident near Glencarse a tree had also come from outside of the railway boundary.

RAIB offered two recommendations to Network Rail, firstly that Network Rail should review and strengthen its process for gathering information about neighbouring land which could offer a high risk of tree fall impacting the railway and to inform them of their responsibilities and the threat that their trees could bring to the railway. The Office of Rail and Road (ORR) has informed RAIB that these recommendations have been undertaken.

Another similar accident took place on the 17th of October 2019 when a passenger train hit a fallen tree close to Spittal in Pembrokeshire. Once again RAIB published a Safety Digest in February 2020 which also described the accident as a tree falling from land outside the railway boundary with Network Rails inspections not picking up the risk the tree presents with no contact made to the land owner.

Following the Lavington recommendation Network Rail reports that from 2010 it has increased its knowledge of lineside trees by undertaking a national inspection during 2010 and 2011. Further inspections were carried out using LIDAR (Light Detection and Ranging) technology from 2014 to 2016 which creates an aerial survey that can locate the position of trees and apply risk models to them. Network Rail has revised and updated its company standard NR/L2/OTK/5201, covering the management of line-side vegetation, to bring down the interval between tree inspections from five years to three years. Network Rail also now publishes information on its website which third party landowners can access and find out about their responsibilities for managing trees which may pose a hazard to the railway.