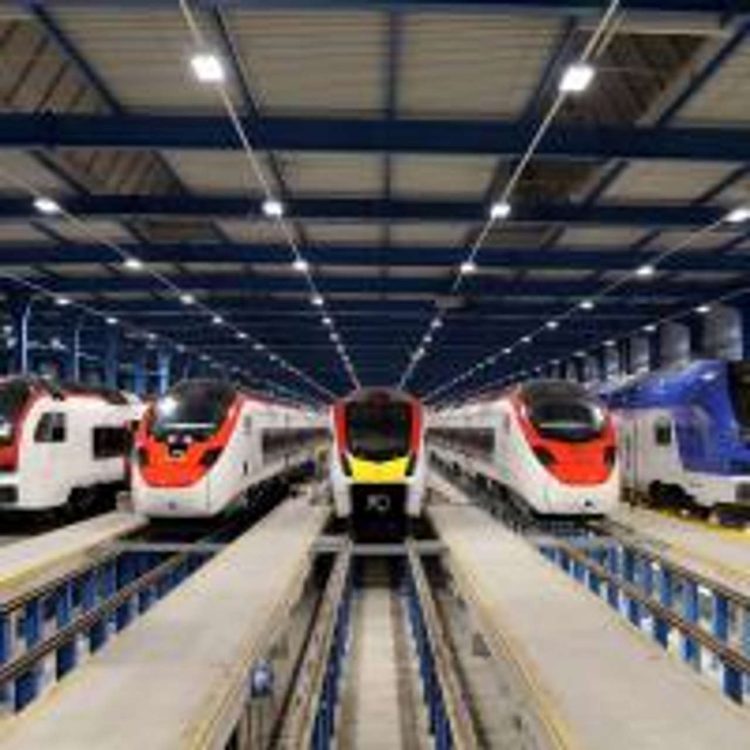 Nexus, the public body that owns and manages the Tyne and Wear Metro, sent a team over to Switzerland to see the impressive 8,500 square metre state-of-the-art train production work up close.

The factory was built just 2 years ago and is one of the most advanced train production facilities in Europe.

Chief Operating Officer Martin Bernhardsgruetter took the Nexus team on a tour of the extensive assembly lines where Stadler builds trains. The team were also treated to a visit to the testing and commissioning facility, where trains are rigorously tested before delivery to customers. The Nexus team also were able to visit the workshops and see where the component parts are being made for the new Metros.

With the assembley of the first new train of the Metro fleet just 12 weeks away, it won’t be long before the new trains will be visiting the test track before delivery to the North East by rail.

Nexus expects the first of the trains to arrive with them during November 2022, where it will undergo further testing before beginning its work in passenger service in the early months of 2023.

Stadler will be building 46 new Metro trains for Nexus and full delivery is expected to be complete anytime up to 2024. Stadler will also be responsible for both servicing and maintenance for the trains over the next 35 years, which will have a positive impact on the regional economy.

The new Metros will also be more environmentally friendly as they are 15 times more reliable and will cut energy usage by 30%. The new trains will also feature up-to-date facilities such as improved internet connectivity, charging points, air conditioning and also a step-change for accessibility. Other facilities will include an automatic sliding step for each door, which will make for easier travel for Metro’s 50,000 wheelchair passengers as well as supporting people travelling with buggies, large luggage and bicycles.

Stadler has also begun building a brand new £70m depot for Metro, which is located at Gosforth and is part of the new fleet project.

Metro Development Director, Neil Blagburn, said: “It was brilliant to get a first look at Stadler’s latest manufacturing facility, and its separate testing and commissioning facilities over in Switzerland, where the new Metro trains will be getting built and commissioned.

“We got the chance to see all of the assembly stages in action within the plant, with aluminium body shells entering at one side and high quality fully assembled trains of all shapes and sizes leaving at the other for customers around the world. We also visited the testing and commissioning sites and saw first-hand the rigorous processes which ensure the trains leave the factory as a fully finished article.

“Being there in person made it easy to visualise the new Metro trains moving through those same production lines less than three months from now.

“I’m delighted to say that that we remain on course to get the first train in the region at the end of next year and we still expect that the first one to be in passenger service in July 2023. Thanks to the efforts of the teams in Nexus and Stadler, no days have been lost due to the pandemic.

“The visit to the Stadler factory brought home just how close we are now to the start of the most tangible stage of the fleet replacement programme. The new Metro trains will transform the Tyne and Wear Metro for customers and secure the network’s long-term future.”