No Result
View All Result
Home 'Pontypool and Blaenavon' 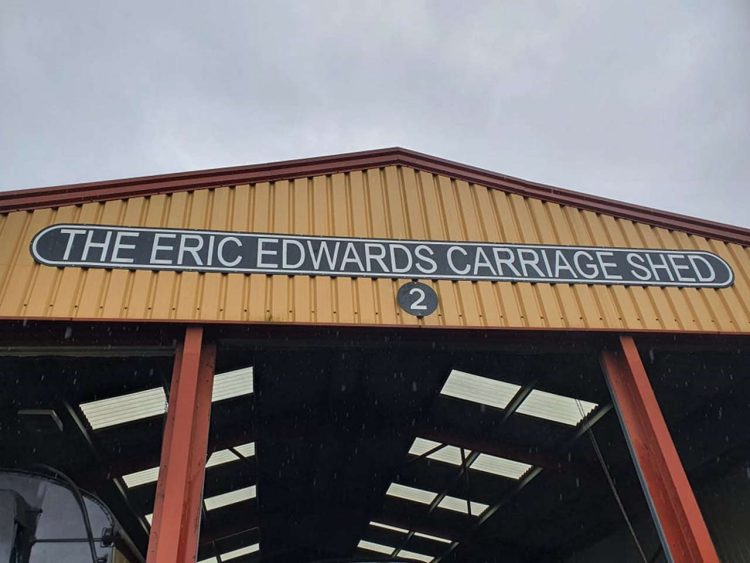 The Pontypool and Blaenavon Railway have announced that their new carriage shed has officially been opened.

Friday the 10th of September saw the opening ceremony take place to dedicate the new carriage shed with an official opening by Welsh Senedd Member for Torfaen, Lynne Neagle.

The shed has been dedicated to volunteer Eric Edwards, who’s generous legacy meant that the well-needed facility could become a reality.

For several years, the Railway has urgently needed undercover storage to keep its heritage rolling stock protected, safe and secure.

Eric was devoted to manning the gift shop, week in and week out for many years.

Sadly Eric passed away in 2014 but his name lives on through his beloved railway shop, which is now called ‘Eric’s Emporium’ to mark his memory and his dedication to his role. Visitors can find the shop inside the Furnace Sidings station building.

The structure of the railway carriage shed cost around £100,000 to build by the railway’s contractors, with work taking place during the winter of 2017 to 2018. With the structure complete, it took nearly two-years to complete the work inside, which was completed by volunteers.

The ceremony guests included local dignitaries and volunteers who took part in the construction of the shed. All guests climbed aboard the recently restored 1910 Great Western Railway directors saloon at Furnace Sidings station to make their way to the new shed.

Volunteer Phil Tiley took time to share his memories of Eric along with the railway’s Development Lead Steve Vincent, who paid tribute to the volunteers who have worked so hard on completing the structure. The official ribbon cutting was carried out by Lynne Neagle.

Guests were treated to a tour of the interior of the shed and also saw the new signage that has been created by member Alex Drummond and allows Eric’s dedication to be proudly shown to volunteers, visitors and passers-by.

The new carriage shed is something for the Pontypool and Blaenavon Railway/Blaenavon’s Heritage Railway and its members to be very proud of. The new facility means that its rolling stock can be enjoyed for years to come and the dedication to volunteers Eric’s memory shows that both his contribution and friendships he made at the railway will live on for years to come too.

Opening the structure, Ms. Neagle commented: ‘It’s always a pleasure to be asked to do anything for the Railway and today is no exception. It’s a real honour to be here to be asked to mark the opening of this magnificent carriage shed, I’m really quite shocked at how big it is and I’m sure it’s what you need. I’d just like to thank everybody that’s clearly worked so hard and in challenging circumstances through the pandemic and I know hard the volunteers work and how committed they are… It’s lovely that it is being done to remember Eric Edwards to recognise the work of one of your fantastic volunteers.’