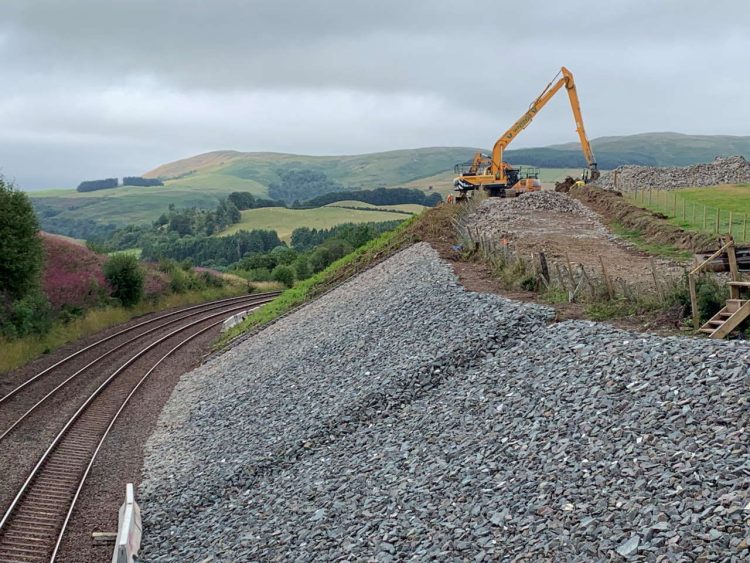 The work includes upgrades to drainage systems and the re-profiling of embankments across a number of sites on the route. Network Rail are working alongside contractors QTS as part of an £8m project to improve conditions to railway cuttings known to flood and also at locations that have been identified via pro-active monitoring as at increased risk of extreme rainfall.

The installation of extensive crest drainage at the top of the railway embankments will direct water flowing from the hillsides which surround the railway into newly upgraded drains carrying the water away from the track, where it will be safely discharged with no impact on the surrounding land.

Along with the crest drainage, trackside drainage has also been improved with a larger capacity, which will handle larger volumes of rain, which will reduce the risk that this presents to railway infrastructure.

Loose stone and vegetation are also being removed and rock netting put in place. The soil slopes above the rock cuttings will also be regraded and this will also lessen the prospect of landslips and the knock-on effect of mud and debris blocking the track.

The project has already used 7,000 tonnes of stone in the re-grading of railway embankments, some of which are over 14 metres in height. 750m of track-side drainage has also seen renewal with over 500m of concrete-lined crest drainage channels, bringing a massive boost in capacity and making the management of water in the area much better. More than 1,000 square metres of rock nettings have also been put in place.

Dealing with the often extreme weather events, the future-proofing project aims to bring the work needed in an environmentally manner keeping its carbon footprint to a minimum. The rock used in the project is sourced from local quarries and the concrete impregnated fabric which is used in lining drainage is more environmentally friendly than the precast concrete options.

Network Rail is improving the condition of earthworks and drainage systems on Scotlands Railway by investing large amounts into the network. From 2014 and 2019, more than £120m was invested in earthworks, drainage and bridge strengthening projects in Scotland and from 2019 to 2024 more than £149m will be spent.

The investments will see more than £30m allotted to improve the network’s resilience to extreme rainfall, £13m will be directed to known flood sites and £25m spend on vegetation management programmes.

Mark Wilson, project manager for the geotechnical and drainage works, said: “We have an extensive programme of proactive works to prevent landslips and reduce flooding, but increasingly, extreme weather events are having a significant impact on our railway.

“Incidents like the embankment collapse at Auldgirth in February last year show the increasing power and unpredictability of the weather; the damage it can do to the railway and the disruption this causes to passenger journeys.

“Improved monitoring and weather forecasting, as well as this type of project, will help address the risk of flooding, embankment slip or rock-fall and help reduce the number of disruptive weather incidents that impact on the railway.”