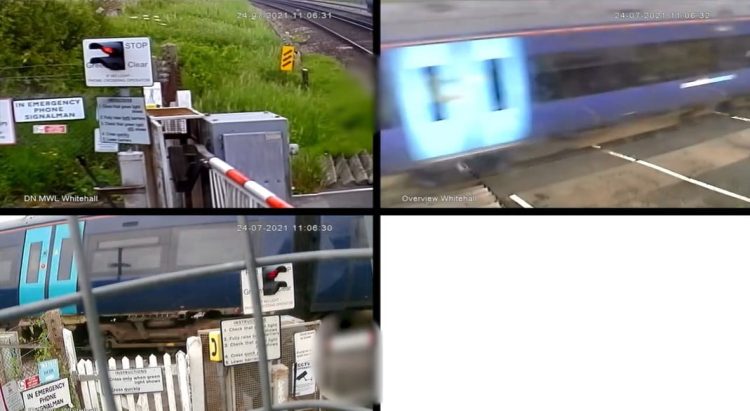 Network Rail has released CCTV footage of a near miss that people had with a train on a level crossing in Canterbury.

The cyclist and jogger had the close shave with a Southeastern train on the Whitehall level crossing and ignored the red lights showing the danger.

The incident happened at the end of July. A train went over the crossing before the pair arrived and presumed no further trains were coming.

Red lights at the crossing can clearly be seen in the video, before the cyclist and jogger make their way over the crossing just a few seconds before the Southeastern train passes at speed.

The driver of the train made an emergency stop and then reported the near miss.

Network Rail Head of Route Quality Health Safety & Environment, Vincent van der Hoeven, said: “It’s really important to remember that when one train passes, another one may be coming the other way. In this case the jogger and cyclist had a red light to warn them, and they still walked out in front of a train.

“This adult pair’s behaviour, apparently putting their desire not to interrupt their exercise to cross the railway safely, nearly cost them their lives and is a clear example of how you put your life at risk as soon as you ignore the red light warning at level crossings.”

Jim Maxwell, Head of Drivers for Southeastern, added: “Our drivers are critical workers delivering a very important service, and don’t deserve the extra stress that these types of incidents cause.

“Reckless trespass incidents like this can have a profound effect on our drivers’ mental health and wellbeing, and I fully support our colleagues at Network Rail and the British Transport Police in trying to identify and pursue the culprits.”

MAJOR DISRUPTION: Trains delayed after collision between tractor and train near March