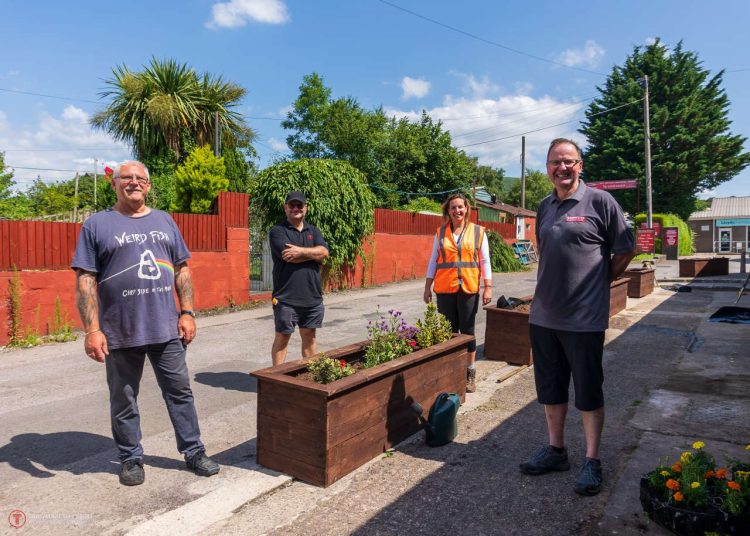 Transport for Wales and civil engineering and construction contractor Alun Griffiths has launched a new project at Taff’s Well.

The project aims to boost biodiversity at the village hall.

Volunteers from the local community and staff from TfW and Alun Griffiths installed 10 large flower planters and wildlife and bug boxes at the village hall on the 17th of July.

TfW has a scheme that is designed to support biodiversity enhancements at 22 stations across the railway network in Wales.

The project is part of the second part of the scheme, which supports five community areas located close to the train stations as a way to join up green routes across the train network.

The Welsh Government and The Heritage Fund gave TfW £100,000 as part of the Local Places for Nature grant for the biodiversity project.

In recent months this is the second project Alun Griffiths have competed in Taff’s Well, donating a large amount of timber for both benches and planters at Taff’s Well Memorial Garden after they lost their wooden furniture in floods.

Mike Phillips, chairman of Taff’s Well village hall, commented: “This is a wonderful project and the best thing of all is that the community gets involved with it.

“It’s a wonderful community here in Taffs Well, we’ve been flooded with volunteers, people coming here day after day and giving up their time just to help us.

“This will probably run for the next two months and every Saturday there’ll be somebody here. If somebody has half an hour spare, great!”

Dr. Louise Moon, project manager for sustainability for Transport for Wales, said: “The project is designed to support more biodiversity features at the hall, which is located just down the road from the train station, to support particularly pollinators and encourage pollinators to use this area.

“It will support nature and give them an access route between the landscape of the station and the railway and the wider community.”

Terry Davies, public liaison officer for Alun Griffiths Construction on the rail division, added: “Alun Griffiths is very pleased to be associated with Transport for Wales and Taff’s Well village hall and to help with this wonderful project of biodiversity to help the community.

“We built some planters at our Taff’s Well site, we brought them over and the community have rallied round.

“We’re very pleased to be of help by providing the planters for this project.”

A new carriage washing machine has been installed at Greater Anglia's Ilford depot and is set to bring...