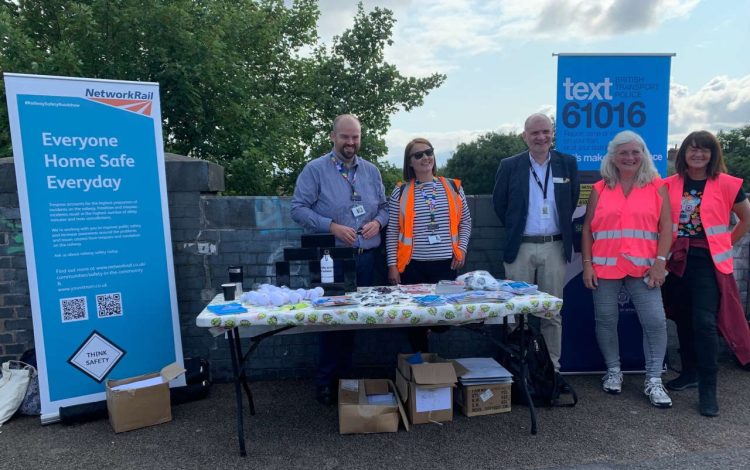 The project to deal with the ongoing issue of trespass and vandalism at South Wigston was undertaken with a collaboration by Network Rail, East Midlands Railway, Cross Country, British Transport Police and the South Wigston Station Adopters.

The drop-in took place on Friday the 20th of August, with teams from the different groups chatting with passengers about concerns that they have and also about how they would like to see the station improved. Information was also sent by post to locals living close to the railway, which offered them a chance to give feedback and offer ideas. The community drop-in incorporated ongoing work to stop trespass and vandalism on the railway.

Between April and July this year, six trespass incidents have been reported at South Wigston and the community drop-in session was part of ongoing work to prevent trespass and vandalism on the railway.

During the day, South Wigston Station Adopters who volunteer to keep their station welcoming, pleasant and attractive, spoke to passengers about Network Rail and British Transport Police’s uncompromising campaign ‘You vs Train’.

Trespassing creates enormous disruption throughout the network with a knock-on effect of delays for thousands of passengers who are just trying to go about their daily business. In a worst-case scenario, trespassing carries a massive risk of catastrophic injury or death.

During the day, work was also underway replacing signs at the station, clearing litter off of the station bridge and platform areas and also rubbish that had been discarded close to the track.

Vandalism is an illegal act making the railway look unpleasant for both passengers and locals. The deliberate dumping of rubbish close to the railway or throwing of unwanted items onto the track is also dangerous with a knock-on effect of causing major disruption to rail services. The cost of cleaning vandalism is millions of pounds each year, which would be much better spent improving the railway for passengers.

Louise Tilly, Operations Projects Manager for Network Rail, said: “We want people in South Wigston to have their say on how we can make improvements to brighten up the station – to help prevent vandalism, make it more welcoming for the community and make sure passengers can travel with confidence.

“We’re also continuing to warn people of the dangers of trespassing and the devastating consequences stepping onto the tracks can have for the individual, their friends and family and the wider community.”

Donna Adams, Community Engagement Manager for EMR, said: “We are delighted to be working with Network Rail, CrossCountry and the BTP to help prevent vandalism and prevent trespassing on the railway.

“The station adoption group at South Wigston has only been in place since early Summer 2021, and in that short space of time we can already see that their sense of community is going to make a big difference to the people that travel through the station.”

A BTP spokesperson said: “Vandalism is not a victimless crime, it costs the rail industry millions of pounds every year which is in turn passed down to passengers. If you see someone trespassing on or vandalising the railway, please report it to us by texting 61016 or calling 0800 40 50 40. In an emergency always call 999.”

Virtual demonstration for Transport for Wales lab this September