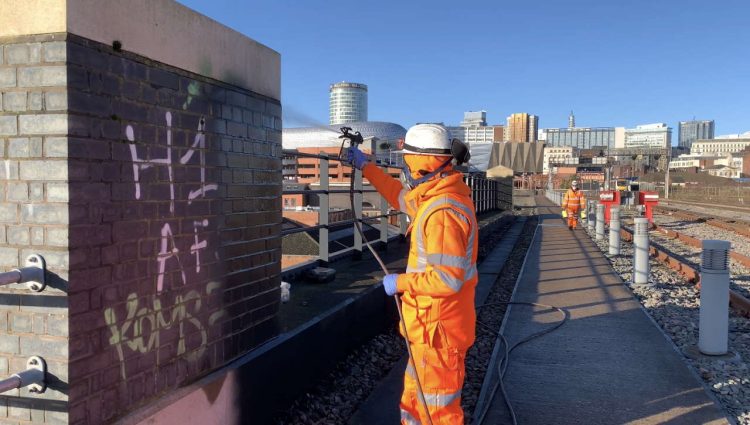 In the West Midlands, a new graffiti hit squad has been launched which will target tags and vandalism across the railway.

Over £700k has been invested to clean up all things railway-related such as bridges by Network Rail and West Midlands Rail Executive, who aim to improve the overall look and feel of track sides for passengers and communities.

The new graffiti hit squad aims to make the railway and its surrounding area more appealing by removing the graffiti which can give a bad uncared-for impression due to the graffiti being an eyesore.

Despite the punishment fine of up to £1,000, the criminal offence is still a big problem for railways and their impression on passengers.

Graffiti can also make some people feel unsafe, so the clean-up work which started this month is crucial to help make the railway feel more welcoming to passengers returning to train travel after the pandemic.

The clean-up work has an end goal of preparing the railway for the 2022 Commonwealth Games.

Allun Edge, maintenance protection coordinator at Network Rail, said: “The railway is a regular target for graffiti but we are determined to tackle it and give the best impression to passengers, local communities and the worldwide audience which will be watching us during the Commonwealth Games next year.

“Removing graffiti is an ongoing battle but we know the majority of people hate it as much as we do. Trespassing on the railway to do it can also have fatal consequences and it’s simply not worth risking your life to spray a wall with a tag.”

Malcolm Holmes, executive director of the West Midlands Rail Executive (WMRE), said: “While we are investing in new stations and new services across the West Midlands it is also important we look after our existing railway infrastructure – which we do through programmes like the Community Rail Partnerships.

“This graffiti hit squad is a welcome addition to that as it sends a positive message to our passengers that our stations, bridges and lines are not only being cared for but under regular supervision.”

Superintendent Sue Peters, from British Transport Police, said: “Vandalism goes far beyond just looking unpleasant. It has huge financial implications for the rail industry and causes frustrating delays to passengers while trains are taken out of service to be cleaned.

“Not only this, offenders are also putting themselves at risk by trespassing on the railway, which can have life-changing consequences. It will not be tolerated and we will continue to support the rail industry by running dedicated operations to target this type of crime.”

Transport Secretary Grant Shapps MP, said: “Graffiti on our railways is unsightly, it makes people feel unsafe and can lead to further crime taking place. It is therefore fantastic to see Network Rail taking the initiative and clearing it up.

“Removing graffiti across the network will help clean up our railway and make stations and services more pleasant for passengers as we build back better and prepare for the Commonwealth Games.”