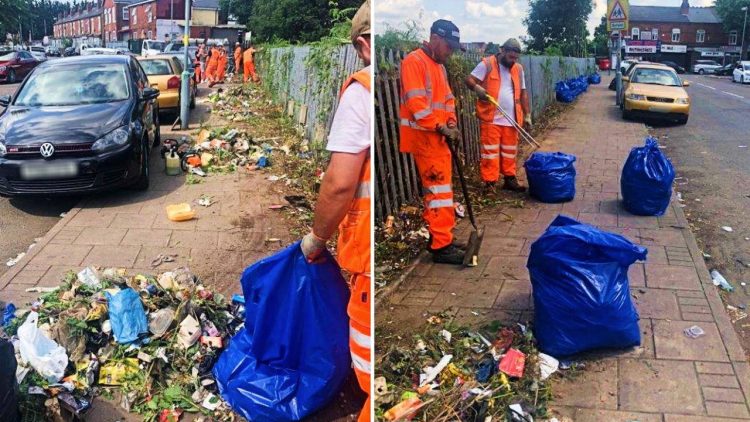 Network Rail has released information about a two day clean up which took place in Birmingham which saw over 60 bags of rubbish collected from the lineside.

The lean up took place at Anthony Road and Cherrywood Road in Alum Rock after Network Rail were contacted about the enormous amount of rubbish and waste on the railway.

Fly-tipping is a huge issue for local communities and Network Rail. Not only does it create an eyesore, it is also a serious safety risk, especially for the maintenance teams who end up having to clear up potentially hazardous waste.

Passengers are also affected as fly-tipped rubbish can impact the safe running of trains, especially if the illegal waste blocks access points which are essential for emergency access and also so engineers can access the track for maintenance work.

Fly-tipping is a criminal offence and those taking part in the illegal activity can face a fine of up to £1,000.

Network Rail take the criminal act of fly-tipping extremely seriously using covert methods also working hand in hand with the British Transport Police to bring offenders to justice. Hidden cameras have been placed in well-known fly-tipping spots also known as ‘grot spots’ which are used to collect evidence and build court cases against those found to be taking part in the illegal activity.

The cost of removing litter, graffiti and fly-tipping is millions of pounds each year. This huge sum of money would be better spent on creating a better railway experience for passengers. Network Rail and the Department for Transport go to great lengths and are committed to making the rail network welcoming for customers who will no doubt feel more confident and likely to choose rail travel if the travelling environment is clean and free of litter.

If you see anyone fly-tipping or have information about somebody who is fly-tipping, please contact British Transport Police on 0800 40 50 40.

Allun Edge, maintenance protection coordinator at Network Rail, said: “It is concerning and disappointing how often we receive reports of litter and fly-tipping in our local communities.

“Not only is illegally dumping waste like this hazardous to our staff who have to clear it up and a risk to railway passengers, it’s also a blight on the environment. It costs millions of pounds of taxpayers’ money to clear waste like this every year – money which should be spent improving journeys for passengers.”

Chief Inspector Chris Hodgkiss, from British Transport Police, said: “Fly-tipping is sometimes seen as an eyesore or a nuisance, but it is a hugely anti-social criminal offence.

“It is costly to clean up and a purely selfish act. BTP works closely with Network Rail and many other partners to actively support prosecution of offenders, using a variety of methods.”