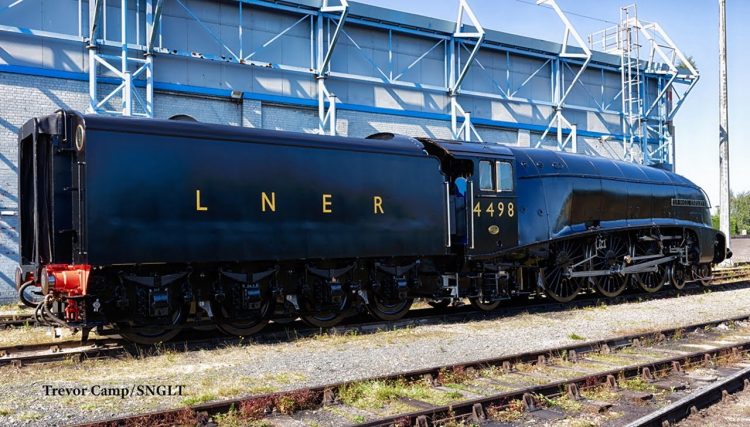 This follows on from the news earlier this week that the A4 had a protective black layer to protect it from the elements whilst at York and also transportation to Crewe, where final overhaul work will take place.

A spokesperson for the SNGLT has confirmed that whilst a final move date hasn’t been announced, it is expected that the move will take place in 2 to 3 weeks time.

This new LNER Wartime Black livery with 4498 on the cab side and LNER on the tender is only temporary and Sir Nigel Gresley will return to steam in BR Express Blue, as voted for by members.

It definitely is a striking livery for the A4, but what do you think? Let us know in the comments below.

The Sir Nigel Gresley Locomotive Trust Chairman, Nigel Wilson, told RailAdvent “The movement from York to Crewe will be in two or three weeks time. The date is not set yet. We will confirm the plans to SNGLT members in due course.”

Once again, the Sir Nigel Gresley Locomotive Trust has asked us to reiterate that 60007 will return to steam in BR Express Blue and this LNER Wartime Black livery is only temporary.

Steam locomotive to haul Christmas tour to Chesterfield this Wednesday