Four local heroes get to see their names on GWR trains after being named BBC Make a Difference Superstars. 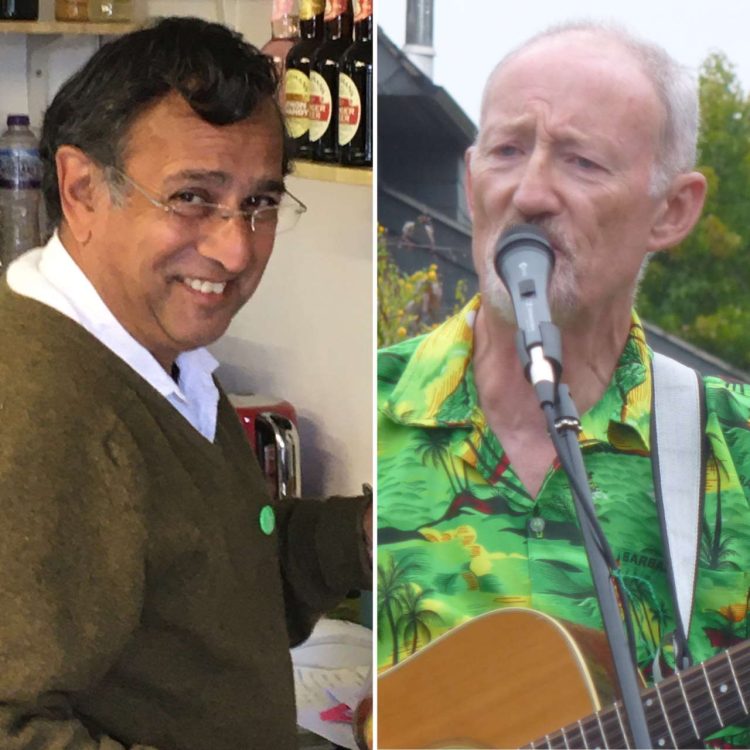 Preston de Mendonça, Jeremy Doyle, Kieron Griffin and Don Gardner MBE were all nominated and selected by a panel of judges as ‘superstars’ for BBC Radio’s Make a Difference Superstars campaign which was run in conjunction with Great Western Railway (GWR) who agreed to rename trains in recognition of the public-spirited competition winners.

The contest was created as an opportunity for people to nominate individuals who make a real difference in their local community and was open for entries from the nine areas which the GWR network covers.

Preston is from Cornwood in the South Hams District in Devon and was nominated following his inspirational activities within the village including encouraging building community togetherness, working to reduce isolation and helping families who were struggling during the pandemic. His selfless support of his local community saw him organise a group of volunteers to help keep the village shop open after the owner had to shield throughout each of the lockdowns.

Preston recognised that the local shop was vital to maintaining food supplies for a large majority of the villagers and his actions have helped locals see the importance of the shop, which is now thriving. Preston also set up a Good Neighbour Group, so that everybody was connected throughout the lockdown, especially if their usual support network was no longer available. This initiative has now grown into a dispersed, informal, rapid, community communication network, which is bringing the local community closer together.

Preston was nominated by Justin Reece who said: “Preston has been a brilliant leader in Cornwood. When lockdown struck he was a key organiser in setting up a Good Neighbours scheme, kept the village shop going as much as restrictions allowed and kept up distribution of gifted food to those who depended on it.

“Utterly self-effacing and modest, Preston would not wish to take credit for any of this, but without his quiet determination, tenacity and stealthy ability to get other people to volunteer much of this would not have happened.”

South West Devon MP Gary Streeter said: “Preston’s community spirit was an example to many and typified the way that our communities pulled together through unprecedented times. I am delighted that his selfless public service has been recognised by GWR.”

Jeremy, who is from Totnes in South Devon, came to the assistance of local residents during the pandemic helping with repairs and also teaching people DIY skills and also helping with issues with IT matters. He also put on a number of street concerts. Jeremy excelled in championing the Totnes community, organising support groups to help with shopping. He also helped neighbours by showing them how to make wooden benches and fixing another neighbours car.

Jeremy’s huge array of skills also enabled him to support people with IT problems and even helping out feeding a rabbit for a young person. The biggest effect that Jeremy had on his local community was organising and taking part in three socially distanced concerts on his street, which he also managed to create a live streaming event via Facebook so that even more people could enjoy it.

Jeremy was nominated by his neighbour Mick Rusling who said: “Jeremy has always been extremely helpful but since the outbreak of the pandemic he’s been truly inspirational. He organised a support group in our street and two neighbouring streets to help each other with shopping, in particular supporting those who were high risk and unable to venture out.

“He gave out plants, showed people how to construct wooden benches, loaned tools, rewired my light, fixed a neighbour’s dinghy, drove people to hospital appointments… the list goes on.

“But perhaps his most inspirational thing was arranging, playing and singing at three socially-distanced concerts, which was a real lift for people, especially those living alone with limited social contact.”

Totnes MP Anthony Mangnall said: “I am very pleased that Jeremy’s selfless efforts during the pandemic have been recognised and that there will be a lasting reminder of his contribution to the community. This honour is very well deserved and reflects the gratitude of the residents of Totnes.”

Great Western Railway Regional Station Manager West Mark Chorley said: “Preston and Jeremy went to incredible lengths to support their communities and we’re thrilled to add their names to the side of an Intercity Express Train.

“It has been humbling to learn about the kind-hearted efforts of so many in our communities and Preston and Jeremy are great examples to the rest of us. Congratulations to them and to the team at BBC Radio Devon.”

Kieron is from St. Newlyn East near Newquay in Cornwall has Cardio Fascio Cutaneous Syndrome which is a rare genetic condition that affects him in many different ways. Kieron is partially sighted, has epilepsy, scoliosis and low muscle tone amongst other issues and had to shield during the lockdown.

The 19-year-old was inspired by Captain Sir Tom Moore, giving him the idea to walk ten laps of his garden each day for three months, raising a huge £5,135 for the Covid-19 fund and Child Health at the Royal Cornwall Hospital (RCH) which is in Truro. Kieron also raised an extra £585 for the Acute Liaison Nurses at RCH on his 18th birthday and was a true inspiration to his local community through the lockdown.

Kieron was nominated by his mum Marie who said: “Kieron battles on a daily basis with obstacles but this did not stop him doing his walking. He truly has been an inspiration to many who know him and helped them to get through lockdown.”

Truro and Falmouth MP Cherilyn Mackrory said: “Kieron Griffin’s fundraising efforts during the pandemic are incredible by any standard, but when taking into account the challenges he faces in his day-to-day life, are simply astonishing.

“I could not think of a more worthy recipient of having a train named after him, and I would like to thank GWR and the listeners of BBC Radio Cornwall for making this happen.”

Don, who is from Camborne in Cornwall, has made a massive difference to the people in his community and surrounding area by setting up the Transformation CRP Foodbank with his late wife Jenifer who died unexpectedly in August 2020.

Don has been totally dedicated to the food bank for more than 11 years and captured the nation’s heart following an emotional appearance on BBC2 Cornwall with Simon Reeve where he talked about the food bank the day before his wife’s funeral. A massive £280,000 was raised following the show which will secure the charity for four years. Don has dedicated the honour of being named BBC Make a Difference Superstar to his wife of 53 years Jenifer.

Don was interviewed on BBC Radio Cornwall about operating the foodbank through the pandemic and said: “My cup was always half full, so if there was a challenge we were going to meet it.”

Camborne & Redruth MP George Eustice said: “It is great to see Don recognised in this most iconic way. Don has been at the heart of our community raising help and awareness for those in need. I am pleased to see that his goodwill will now reach even further than Cornwall.”

Great Western Railway Regional Station Manager West Mark Chorley said: “Kieron and Don went to incredible lengths to support their communities and we’re thrilled to add their names to the side of an Intercity Express Train.

“The GWR has a long and proud history of naming trains after Great Westerners – past and present heroes from across our network – and it’s a real treat to add these two community heroes to that list.

“It has been humbling to learn about the kind-hearted efforts of so many in our communities and Kieron and Don are great examples to the rest of us. Congratulations to them and to the team at BBC Radio Cornwall.”