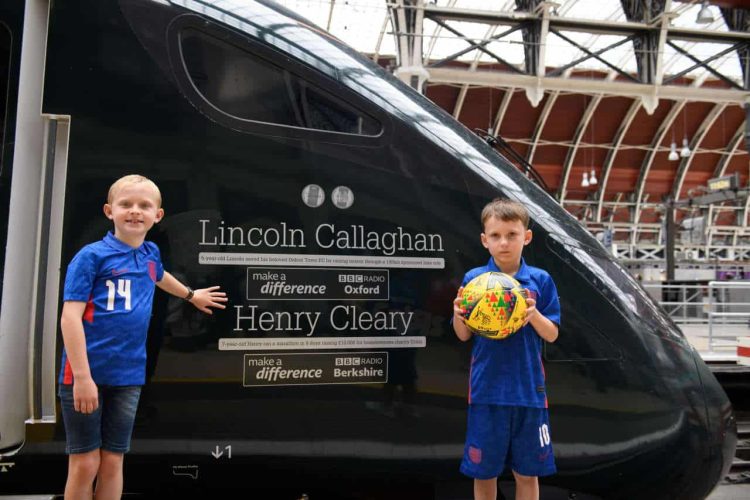 Great Western Railway and BBC Make a Difference Superstars have celebrated two heroic fundraising youngsters by having a train named after them. The duo have become the youngest people to ever have their names on the side of a train, for going above and beyond to help others in their communities.

Lincoln Callaghan and Henry Cleary have both been chosen as the BBC Make a Difference Superstars after helping other people during the peak of the Covid-19 pandemic.

Lincoln was only five years old when he took part in a fundraising appeal from his favourite football team, Didcot Town who are also known as The Railwaymen.

The club launched an appeal to raise £10,000 to help keep them going during the pandemic.

Lincoln asked his dad if they could help by doing a bike ride to raise money, and they did, cycling an impressive 100km during allowed exercise time.

The pair completed the journey in just a month raising £2,250. Alongside the bike ride fundraiser Dad Chris and Lincoln organised an online scratch card competition raising a further £1,000.

Star Wars super fan Henry is from Stoke Poges in Buckinghamshire and at just seven years old focused his incredible fundraising skills on the plight of the homeless during the pandemic.

The amazing youngster set a target to run a marathon in 10 days with a target of raising £262 or £10 per mile. Henry ran the marathon, completing 26.2 miles over nine days and raising more than £10,000 for homeless charity Crisis.

The boys names will feature at both ends of high speed Class 800 Intercity Express Train 800030.

The National Railway Museum believes that both Lincoln and Henry are the youngest none Royal children to ever have trains named in their honour.

NRM Lead Curator Ed Bartholomew said: “Although other locomotives have been named after Royal children, these will be the youngest non-Royal children to be honoured with a train naming.”

Rail Minister Chris Heaton-Harris said: “Lincoln and Henry have shown incredible resolve and dedication as brilliant fundraisers, and I know their families, friends and communities will be incredibly proud of their achievements.

“Having their names on the side of a GWR train cements their status as Great Westerners, and I congratulate them on this well-deserved honour.”

“Lincoln and Henry went to incredible lengths to support such worthy causes and we’re thrilled to add their names to the side of an Intercity Express Train.

“The GWR has a long and proud history of naming trains after Great Westerners – past and present heroes from across our network – and it’s a real treat to add two such kind-hearted youngsters to that list.

“It has been humbling that it’s often the oldest and the youngest listeners who have led the way. Lincoln and Henry are the youngest superstars and great examples to the rest of us. Congratulations to them and to the teams at BBC Radio Oxford and Berkshire.”

Didcot Town director and trustee Roger Neal said: “It has been incredibly difficult for us to keep going during the pandemic and the fantastic work Lincoln has done has literally helped us to keep the lights on.

“Full credit to him – we can’t thank him enough. We’re so used to seeing him cycling around the perimeter of the pitch during games and to take on this fundraising challenge was a stunning effort.”

Crisis Chief Executive Jon Sparkes said: “We’re incredibly grateful that Henry chose to support us last year when he took on his marathon challenge. The pandemic has been especially tough for people experiencing homelessness and highlighted just how crucial it is that everyone has somewhere safe to call home.

“Our year-round work to support people out of homelessness is only possible because of people like Henry. He really is a superstar in our eyes and we’re really pleased to see his amazing efforts recognised in such a wonderful way.”