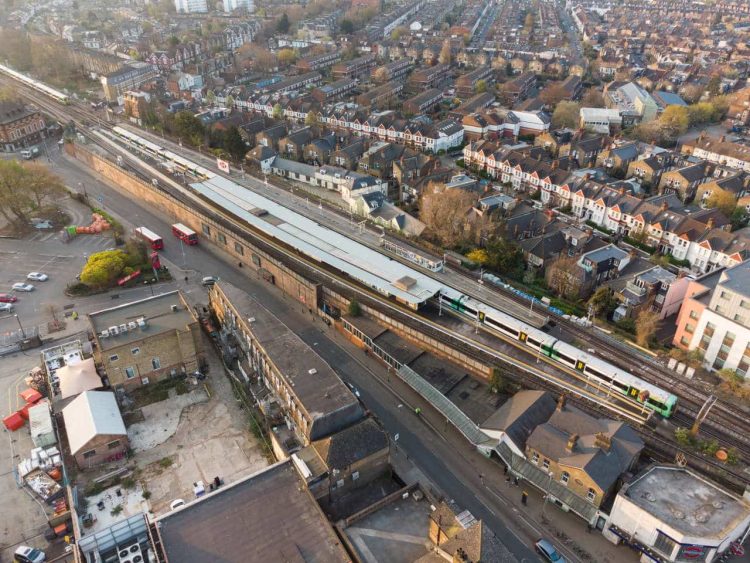 Balham Station, which serves as an interchange for both tube and train services around South London, has received essential upgrades with an investment of £2.6m by Network Rail.

The upgrade work, which began in October 2020, includes reducing the gap between trains and platforms which involved track realignment, providing a shorter stepping distance between train and platform.

New fencing has also been put in place at the London end of the platforms which is hoped to avert trespassing.

The platform canopies have also been given a make-over with new sheeting fitted to keep passengers dry and a new canopy gutter has been installed which is made from new galvanised steel and the drainage system has been upgraded which will lessen the risk of flooding.

New tactile paving has also been added on platforms which will provide better accessibility for visually impaired passengers.

Balham Station was first opened in 1856, then known as Balham Hill, and was actually sited on the west side of Balham High Road.

In 1863 the station was repositioned to its current location when work took place to widen the line to improve the route from East Croydon and London Victoria Station.

Further changes to the line took place in 1890 and also in 1897 to create improved capacity and also several name changes over the years with it returning back to Balham in 1969.

The station has been developed many times throughout its long journey serving passengers and freight and these latest upgrades will keep Balham Station fit for purpose throughout the 21st Century.

Shaun King, route director for Sussex said: “This is another fine example of what can be achieved by working in partnership with our industry colleagues. We have worked closely with Southern and other stakeholders throughout this project while maintaining station access during the works.

“The upgrades at Balham station are a real boost to commuters and rail passengers who are now able to enjoy vastly improved facilities which will make rail use safer for the public.”

Chris Fowler, Southern’s Customer Services Director, said: “On behalf of our customers we welcome Network Rail’s wide-ranging comfort and safety improvements at Balham. As passengers return to the station, the new seats and platform shelter we’ve installed as part of our own network-wide, multimillion-pound station improvement programme will also enhance their travel experience. Customers told us they wanted more wooden seating, so we’ve put in seven new benches.”