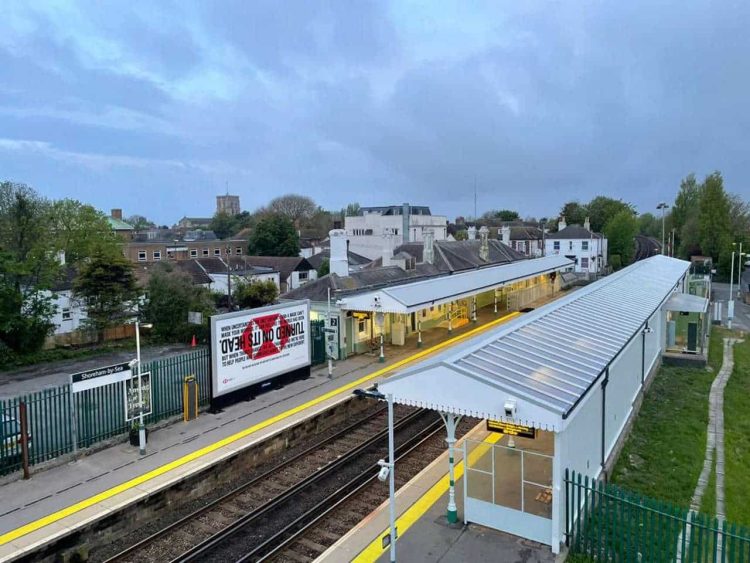 The huge project for an environmentally friendly repair and refurbishment project at Shoreham-by-Sea railway station is now finished.

The station serves both the town and Shoreham Airport (also known as Brighton City Airport) and is one of the oldest stations in the south of England being in operation since 1840.

The renovation has included replacing roof sheets on both platforms, replacing gutters and downpipes to reduce the risk of flooding, also, the timber valance boards have been replaced to protect the canopy.

Replacement of fascia boards will stop water from getting through the roof and preparation and painting of the canopies metal and timber work will protect the structure.

The station now features a staffed ticket office which is open most of the day throughout the entire week, and self-service ticket machines are available.

The station now features step-free access throughout and a passenger waiting room which includes a departure board and modern help points, there is also a cafe and toilets which will be open during staffed hours.

The project has involved trialling the use of hydrogenated vegetable oil fuel or HVO during the work and has helped to cut the amount of carbon produced on the site by 37%.

HVO is a progressive renewable fuel that is made from pre-existing bio-waste products like cooking oil, waste plant and organic matter.

Shaun King, Sussex route director for Network Rail, said:“This upgrade has made a big difference to Shoreham-by-Sea station by improving the experience for passengers. These improvements are a vital aspect of our work to provide a safe, reliable and efficient railway.

“Shoreham-by-Sea was also the first project in Sussex to use recycled cooking oil instead of diesel fuel, allowing engineers to reduce the amount of carbon produced at the site by 37%. These actions help Network Rail work towards its goal of Net Zero Carbon Emissions by 2050.”

Chris Fowler, Southern’s Customer Services Director, said: “On behalf of our customers, we welcome Network Rail’s investment to restore and protect the fabric of the station buildings at Shoreham-by-Sea, and thank them for the care taken to minimise disruption and use low-carbon energy.

“As restrictions ease and more passengers return to the station, they’ll also be able to enjoy a package of enhancements we’re making as part of our own network-wide, multimillion-pound station improvement programme. These include new seats and platform shelter, refurbishing the waiting room, and refreshing the landscaping.”

Network Rail has unveiled plans to improve the safety at a level crossing on a 90mph railway line...