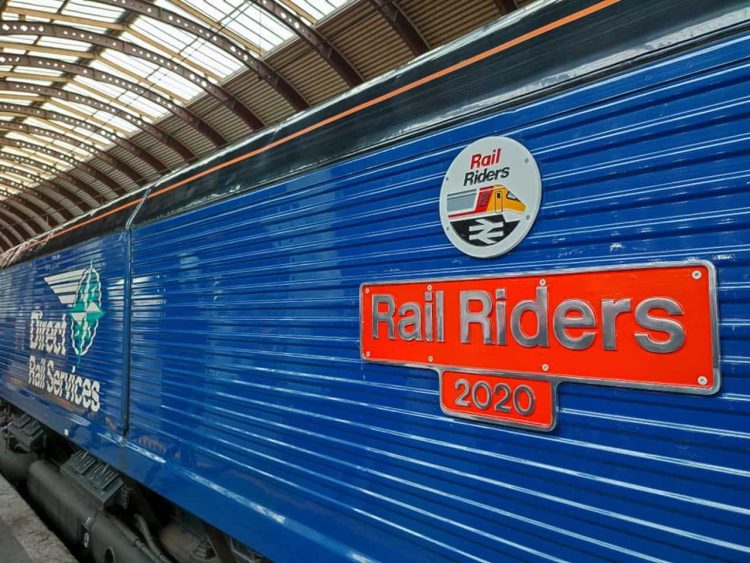 As part of the surprise event, already named DB Class 66, 66175 ‘Rail Riders Express’ made an appearance at the naming ceremony.

Rail Riders also arranged for former membership secretary, Angela, to help name 66303 with Simon Buxton and Mrs Benn, the widow of Michale Benn, the owner of the company who ran Rail Riders on behalf of British Rail.

Simon Buxton from Rail Riders, told RailAdvent “To have both locomotives named after the club stood in York station together was a great spectacle for the invited club members, most of which had no clue what was going to happen. We thank DB Cargo for making this happen.”

Chris Connelly, NTS Deputy CEO and DRS Rail Director, said: “It’s fantastic to work with the rail enthusiast community on this project and it will be great to see Rail Riders 2020 cover Britain’s railway network.

“66303 was chosen as it can cover the entire rail network and can be used on DRS’s entire portfolio of work from nuclear to intermodal, ensuring the country’s lights stay on and supermarket shelves are full.”

Simon Buxton, Rail Riders Director, added: “We’re thrilled to be working with DRS and would like the thank them for their support. It’s been a long time coming, having been originally planned for last year but to have the locomotive actually named in York station is incredible. I look forward to seeing photos of this special locomotive on social media travelling around the country.

“We’ve now got two named locomotives flying the flag for the club which is beyond my wildest dreams when I first started the process of bringing it back to life. The club will go from strength to strength over the next 12 months and the response we have received across the railway family has been outstanding.”

As part of the new naming, a £5 discount is being applied to Rail Riders Memberships, which is already applied at checkout.

For those of you who have Train Simulator on your PC, you can now download a reskin with the new new nameplate.