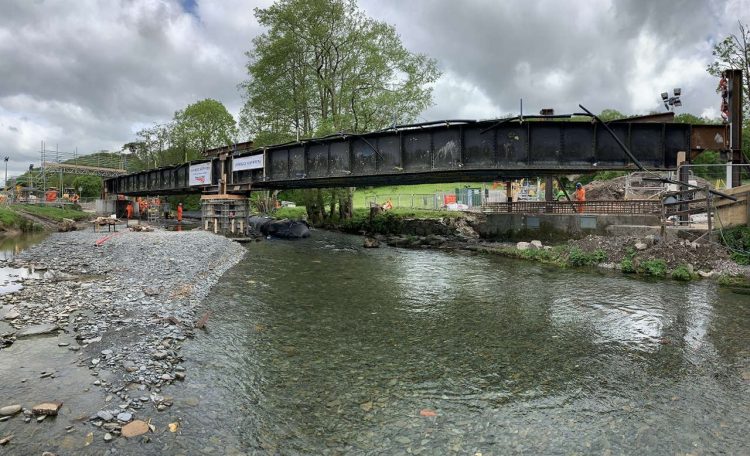 Work is progressing on the project to raise a railway bridge in Wales despite the weather.

Network Rail started work on the project last month, which will see Black Bridge, near Machynlleth, raised by one metre and hopefully preventing future closures of the line due to flooding.

At the end of May heavy rain caused the River Dulas to rise, closing the bridge and setting back the work schedule.

The latest on the £3.6m project is that the deck has been lifted and is secured into position temporarily.

The next stage of the project will see the bridge lowered onto newly constructed bearings.

While the bridge work takes place, rail replacement bus services are operating between Machynlleth and Shrewbury.

The railway line is expected to be closed until the 28th of June while the work on the bridge and relaying of the track takes place.

Kevin Giles, senior asset engineer for Network Rail Wales and Borders, said: “The flooding we have seen at Black Bridge during our work shows exactly why raising the bridge is so important.

“We are putting passengers first by making the railway more resilient and reliable.”

The bridge is repeatedly flooded during periods of heavy rainfall, causing regular closures and disruption to passengers on the Machynlleth to Shrewsbury route.

The public has been asked to vote on the name for a new railway station on the site...

CrossCountry services through Birmingham to be disrupted next month