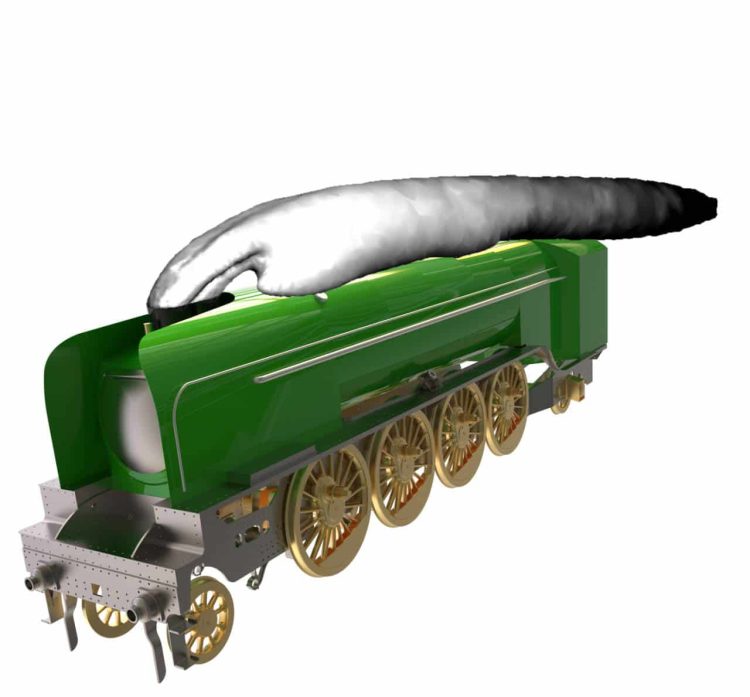 The P2 Steam Locomotive Company / A1 Steam Locomotive Trust has announced that they have commissioned Frewer & Co Engineers Ltd to examine the impact of the Coanda effect on P2 No. 2007 Prince of Wales.

The commissioning of the Dorking-based company is part of the continued application of modern techniques in the building of the locomotive.

The Gresley P2 ‘Mikados’ were the most powerful express locomotive to operate in the UK.

Designed by Sir Nigel Gresley in the 1930s, the locomotives hauled 600-ton trains on the Edinburgh to Aberdeen route. Unfortunately, the design was never fully developed and was rebuilt by Edward Thompson into A2 Pacifics.

Progress on the new locomotive has continued at pace despite the impact of the coronavirus pandemic. The locomotive is now recognisable as a P2 whilst the tender tank and tender wheelsets are now at Darlington Locomotive Works.

Following a partnership with Frewer & Co Engineers Ltd in March 2021 where the company undertook Computational Fluid Dynamics (CFD) analysis of the cylinder block steam passageways, a new partnership has started.

The second of the original Gresley P2s, 2002 ‘Earl Marischal’, was completed at Doncaster Works five months after 2001 Cock o’ the North.

Unlike 2001, 2002 was fitted with Walschaerts valve gear rather than Lentz-type rotary-cam actuated poppet valve-gear. As a result, 2002 was documented to have issues with steam exhaust obscuring the view of the train.

The problem was initially fixed by fitting additional smoke deflectors before it was resolved by the fitting of the A4 streamlining to the P2s.

In order to make sure that 2007 does not suffer with the same problems as the original P2 design, a CDF study into the influence of the Coanda effect on the steam over the casing is currently being completed.

The Coanda effect is the measuring of the tendency of a fluid to follow a flat or curved surface, so in the case of a P2 locomotive, is the crosswind travelling over the casing will stick to the casing and draw steam down over the surface, obscuring the drivers view.

The study wants to replicate the problems documented, and if this is achieved, design changes can be tested to investigate how to prevent the problem from happening with 2007 Prince of Wales.

Ben McDonald, Group Director of Engineering, A1SLT, commented: “The commissioning of Frewer to undertake a Computational Fluid Dynamics analysis of the influence of the Coanda effect on the exhaust steam over the casing is part of the continued application of modern techniques in the design and development of our improved class P2, completing the work of Sir Nigel Gresley from the 1930s.”

Martha Cooper, Head of Advance Analysis Division, Frewer, commented: “We are very excited to be contributing to this project, and it is a unique opportunity to demonstrate how modern analysis tools and capabilities can be applied to a classic design, inspiring the next generation of engineers. We have found it really interesting to work closely with A1SLT and appreciate the expertise and attention to detail, both in Gresley’s original and in the modern improvements to the design.”

Mark Allatt, Trustee, The A1 Steam Locomotive Trust, commented: “We are delighted with the support the project to build Britain’s most powerful steam locomotive has received since its launch over seven years ago. With over £3.4m spent and around £3.9m donated to-date of the estimated £5m required, we remain on-track for completion within three years. However, to maintain this progress we need to raise £700,000 per year and we are still seeking to ‘P2 for the price of a pint of beer a week’ regular donors or covenantors.” The A1 Steam Locomotive Trust, which is building Prince of Wales, has renamed ‘The Cylinder Manufacturing Club’ as...