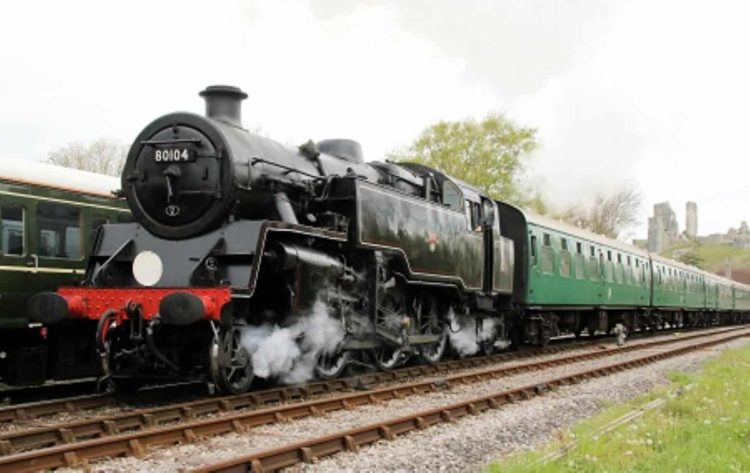 With other locomotives taking priority, 34010’s restoration has progressed slowly, but not stopped in the past few months.

The frames have been transported to Sellindge to join SR Merchant Navy 35025 “Brocklebank Line”, where shot blasting can be carried out on both engines.

May 2021 has been a huge month of success for “Eddystone”, with the engine passing steam tests and running in to fully enter traffic on Monday 24th May.

A big thank you goes out to supporters, SLL shareholders and contractors (namely Tyseley Locomotives Works and South Devon Railway Engineering) for assisting on the overhaul of 34028 over the past seven years, costing approximately £250,000.

“Eddystone” can now be found in traffic on the Swanage Railway, where the locomotive is currently based.

Known as ‘SKP’, the engine has been in service on the Spa Valley Railway since they reopened in May 2021.

The covered storage and great team ensure 34053 is kept in top condition.

Later this year the railway plans to run SKP as lost classmate No.34095 “Brentor”.

Work at Tyseley Locomotive Works (TLW) has progressed well, with the green light given to re-tube the boiler.

Now back on all three sets of coupled wheels and motion reassembled, 34070 awaits both hydraulic and steam tests in July.

“Manston” will return back to Herston for final refitting work, such as pipework and brake gear before entering traffic on the Swanage Railway.

Retaining the same paintwork, 34070 will return in a ‘weathered’ condition.

Currently “Manston” is expected to be back in traffic sooner than “257 Squadron”.

Withdrawn from traffic and back at Herston Works, the SLL team have been able to assess the work needed to return 34072 back to steam.

Unfortunately, due to the amount of work required to fit a replacement steampipe, “257 Squadron” will need to visit Tyseley to complete the work.

In better news, repairs to the bogie have progressed very well, with the decision made to use 34072’s bogie frame but use 34010’s bogie wheelsets.

Disassembly work has continued, along with sending some components off for shot blasting.

Both the leading bogie and trailing truck have been detached, ready for when the frame is moved in the future.

Other parts, such as the boiler, will be moved closer too.

Working until its last day in ticket on Tuesday 11th of May 2021, the Standard 4 Tank now awaits overhaul at the Swanage Railway. A very generous supporter has provided a £200,000 interest-free loan towards 80104’s overhaul, estimated to cover three-quarters of the overhaul cost.

SLL is seeking further support to ensure the overhaul can be fully funded, which could hopefully see 80104 return in 2023. Tyseley has quoted to carry out the overhaul, the majority of the cost to be spent on repairs to the copper firebox.

75050 should hopefully be re-wheeled next month, once the axle boxes have been overhauled. Delays have occurred in producing the new foundation ring after the company originally contracted have shut down.

Although suffering setbacks throughout its overhaul, it’s hoped that “Norman” will return in 2022.

For more information or to support Southern Locomotive Ltd in maintaining their fleet, please visit their website here.