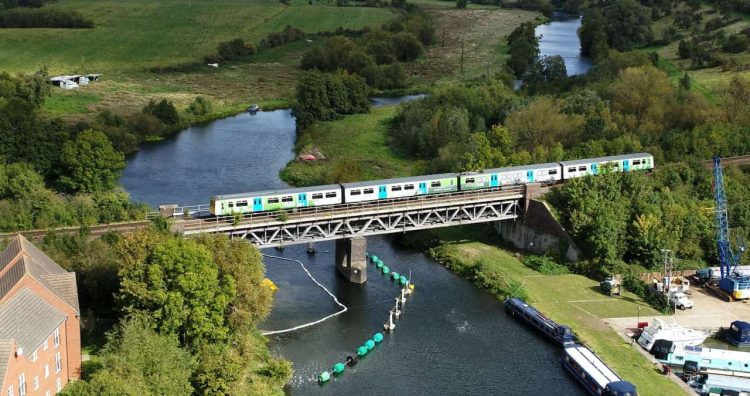 Network Rail and Porterbrook have announced that they have formed a partnership to show the world Britain’s green railway traction for the future at the upcoming UN Climate Change Conference of the Parties (COP26).

Taking place later on in 2021 in Glasgow in Scotland, COP26 will see many leaders of the world’s countries take part in meeting to discuss climate change.

A key part is ensuring we reduce carbon emissions in our daily activities, such as transport. Britain is playing a leading role in developing efficient and sustainable trains to reduce emissions.

For several decades overhead wires have provided electricity to trains, with battery-powered units now in circulation across the world.

Another form is hydrogen, an energy source Britain is currently investing in to hopefully produce sustainable trains.

To show Britain’s development into hydrogen-powered trains, their latest project will be on show, HydroFLEX.

HydroFLEX has been fitted out with a boardroom to host COP26, which will give guests a first-hand view of the train and its advanced technology which could play a crucial part in producing low / zero emissions trains.

Rail Minister Chris Heaton-Harris said: “As a previous winner of DfT funding through our First of a Kind competition, it is amazing to see Porterbrook’s HydroFLEX train showcased on an international stage.

“Ground-breaking green technology projects like HydroFLEX are central to our plan to decarbonise the rail network by 2050.”

Network Rail’s Group Safety and Engineering Director Martin Frobisher OBE said: “I’m delighted to announce we are hosting this exciting train at COP26. Rail is already the greenest form of public transport and we want to show our commitment to running an even cleaner, greener railway and playing a vital role in helping tackle climate change.

To do this, we’re working in partnership with Porterbrook, an innovative British company who have developed green technology with tremendous export potential.”

Managing Director of Scotland’s Railway Alex Hynes said: “We’re working hard alongside Governments to bring the benefits of electrification and decarbonisation to communities across Scotland. We have ambitious targets to decarbonise our network and developing new technologies like hydrogen and hybrid trains will be key to delivering on those commitments.

During COP26 the world will be watching Glasgow, and this will be a tremendous opportunity to demonstrate how rail will play its part in making a greener future.”

CEO of Porterbrook Mary Grant said: “We are delighted to work with Martin and the Network Rail team to bring our HydroFLEX to COP26 and showcase the best of British engineering to the world.

Porterbrook has spent the last three years working on a range of engineering initiatives that will help both UK and Scottish governments meet their decarbonisation targets.

We believe that our £7m investment in HydroFLEX reflects a significant acceleration of the railway industry’s journey towards Net Zero.”