Can you recognise anyone in this photo at the closure of Okehampton Station? 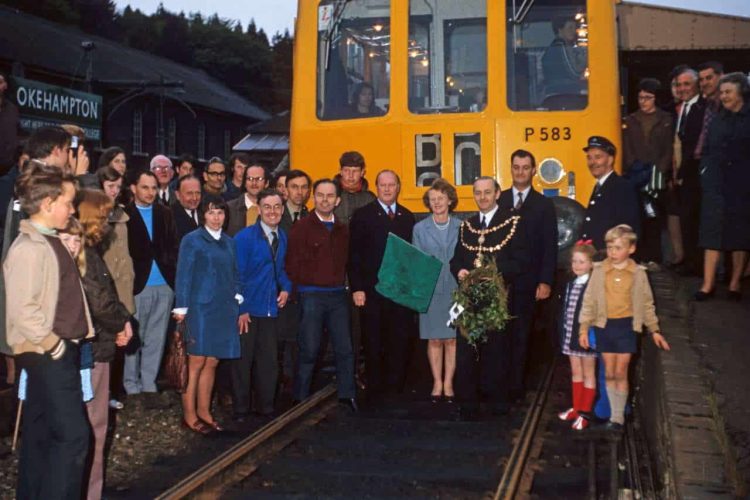 With Network Rail progressing well with work to reinstate the railway between Okehampton and Exeter, Great Western Railway are looking back on a photo showing the final regular passenger train to depart Okehampton Station.

To mark this last train, various guests and enthusiasts gathered at Okehampton, where the above photo was taken by Bernard Mills, a former Great Western Railway Customer Advisor who has worked in the rail industry for over half a century.

Bernard has so far be able to identify the following people:

Two to her left in the claret jacket is Bernard’s friend, the late Ivor Hocking, next to him the late Lloyd Goodman – a stalwart of Launceston Railways – and next to him in the blue coat the late Tom Reardon.

Bernard can also pick out the late Brian Tunbridge, in glasses behind Tom Reardon, but the Dartmoor Line project team is keen to trace others who can share their memories of the final train service.

Network Rail has been working at record-breaking speeds to relay the route, with 11 miles of track installed, 24,000 concrete sleepers and 29,000 tonnes of ballast all being laid to date.

Attention on the project has now turned to masts for the Railway’s Mobile Communications System (GSM-R) and repairing bridges along the track, along with finishing off the track and running test trains.

GWR Dartmoor Route Project Manager Ian Mundy said: “We’d love people to share their stories with us and be able to invite them along to one of our Dartmoor Line open days at the end of the year.

“We’re excited to be pressing ahead with this project, which will greatly improve connectivity for people living between Okehampton, Exeter and the surrounding areas.”

Bernard Mills said:“I’m certain that in these days of health and safety we wouldn’t be able to recreate it with the mayor, his wife and bystanders positioned on the track!

“Looking back on that day, it’s tinged with some sadness really. Okehampton wasn’t one of those stations mentioned for closure in the Beeching Report, but once they started taking away all the other stations it was inevitable. It was very much the climate of the day.

“Now I can’t wait for the line to reopen and I’m pleased this photograph has stirred so much interest. I think I’ll be one of the few who rode on that last train 49 years ago to have the privilege of being on the train when the line reopens.”

Network Rail Route Programme Director, Dan Parkes, said: “We’re pleased our work to reopen the Dartmoor Line is progressing so well and it is fitting to be recognising the 49th anniversary of the last regular passenger service as our engineers continue to work hard to reinstate this important railway line by the end of the year.

“Despite recently reaching the key milestone of successfully relaying all the track and sleepers, there’s still a significant amount of work to do and our focus now turns to undertaking a range of work either side of the track to support the safe and efficient return of a regular train service on the Dartmoor Line.”

If you were in this photograph or were there on the day, you can contact the Dartmoor Line via email [email protected]