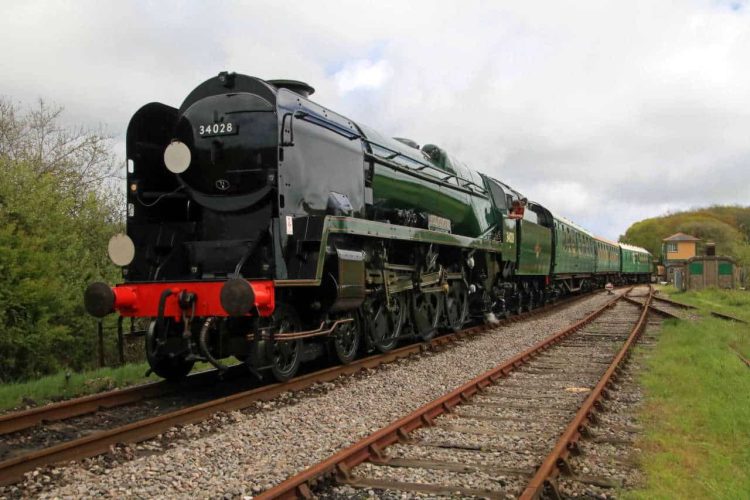 Owned and maintained by SLL, 34028 on Monday 26th April 2021 was transported from Herston Works, where its overhaul took place, to the Swanage Railway for ‘running in’ to test the whole engine before entering traffic fully.

All going well “Eddystone” should be hauling steam trains along the Swanage Railway this summer.

The last time 34028 was in service on the Swanage Railway was back in 2014, before being withdrawn from traffic.

Placed into storage until the SSL had the resources to begin, “Eddystone” entered Herston Works roughly four years later in 2018, where SLL’s staff and volunteers carried out the majority of the required work.

“Despite delays caused by Covid-19 – and subject to restrictions in working practices – the overhaul has been completed to a high standard. No. 34028 is one of the Swanage Railway’s fleet of steam locomotives operated as part of a long-standing agreement with Southern Locomotives Limited,”

“It’s worth remembering those people who made ‘Eddystone’s rescue and restoration possible – Southern Locomotives Director Richard Moffatt, who purchased the locomotive from the Barry scrapyard in south Wales, Willie Bath who masterminded No. 34028’s restoration as well as Bill Trite who brought us together in the first place,”

Before and after video released of £3.7m Todmorden railway viaduct restoration