by A RailAdvent Author
in Infrastructure
Reading Time: 4 mins read
4 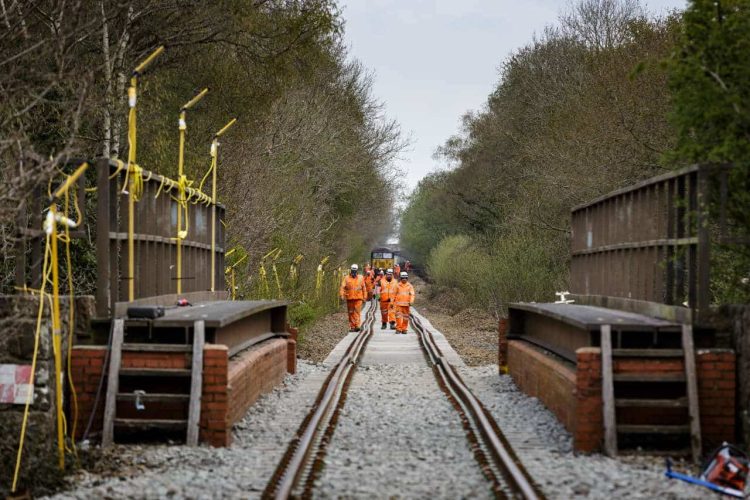 Network Rail has announced that the reopening of The Dartmoor Line has reached a milestone after engineers finished relaying new track and sleepers.

Government funding for the reopening project was confirmed in March, and work started immediately on the 14 mile line between Okehampton and Coleford Junction.

More than 11 miles of new track has been laid onto 24,000 concrete sleepers using a New Track Construction (NTC) machine.

A class 56 locomotive was used to transport the sleepers along the line to be laid on the line at around 5mph. 29,000 tonnes of ballast has nearly been installed, and this will then be followed by the tamper to make sure the track stays in place.

Four miles of lighting has been installed to allow work to continue throughout the night, and is being powered by silent generators to mean no noise for nearby residents.

Becky Tipper, Network Rail scheme project manager, said: “We are delighted with the progress the team has made and this is credit to the hard work and dedication of our engineers involved in this project.

“To have already laid the 11 miles of track, 24,000 sleepers and nearly completing the installation of the 29,000 tonnes of ballast is no mean feat and we are looking forward to focussing our attention on the next stage of work.

“It has also been really comforting to see such interest and support from the local community. We are committed to reopening this important railway line as quickly and safely as possible and look forward to the resumption of regular passenger services in the not too distant future.”

Rail Minister Chris Heaton-Harris said:“It’s brilliant that so much progress has been made already in this project. Network Rail engineers have done an incredible job installing 11 miles of new track and 24,000 sleepers, bringing us closer to seeing regular passenger services restored later this year.

“Restoring the connections between our communities, and building new ones, is key to levelling up across the UK.”

Matt Barnes, GWR regional development manager, commented:“Once reopened, the Dartmoor Line will form a vital rail link for Okehampton and the surrounding areas so we are pleased to see the progress Network Rail are making to upgrade the infrastructure.

“With daily trains running every two hours by the end of the year and hourly services expected to be start in 2022, the new line will help extend the social and economic benefits of the railway to the area and the communities it will serve.

“Once Network Rail has completed their work, we will commence our crew training programme to help ensure a swift return to passenger services on the line.”

Richard Burningham MBE, Manager of the Devon & Cornwall Rail Partnership, added:“Hats off and many thanks to all involved in this tremendous feat. To have laid 11 miles of track already is fabulous and it’s been great to see video of the very innovative piece of kit which has helped on the Dartmoor Line. Thanks too to the Government for funding all this work.”

The public has been asked to vote on the name for a new railway station on the site...

CrossCountry services through Birmingham to be disrupted next month