The Class 50 Alliance Ltd has announced that the Heritage Railway Association (HRA) have awarded them their “Award for Diesel Locomotion”.

In order to win this award, the group had to meet the following criteria:

Awarded to an HRA member organisation for excellence in the overhaul, restoration, preservation or operation of a diesel locomotive(s) or self-propelled diesel vehicle(s).

Once you look at the group’s work over the past 30 years, it can be clearly seen why they were nominated and won, as they have restored six Class 50s to date! 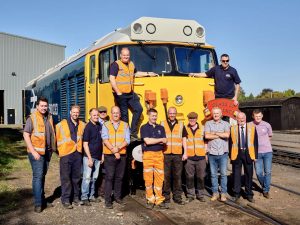 Formed in the early 1990s, the company own five Class 50s and have another one on a long-term loan. These are:

To top this off, the company is made up of only volunteers who carried out a majority of the work and raise funds to maintain their fleet.

Chairman of the SVR Diesels Committee, Jonathan Dunster, said: “It was a great privilege to have been nominated for this award, and I would like to thank the dedicated volunteers of the Class 50 Alliance and our many supporters over the years for helping us to achieve this wonderful fleet. I would also like to mention the Severn Valley Railway, without whose support and incredible diesel depot, we would not be able to continue doing what we love so much.

“The Class 50 Alliance are a remarkable team who have continued to achieve amazing things over the last three decades and uniquely for a group of volunteers have restored four locomotives to main line condition. Something which is without equal in the UK heritage railway movement, either for steam or diesel.”

General Manager of the Ffestiniog Railway Paul Lewin, who presented the award on behalf of the HRA, said: “For myself and many others, the preservation of diesels on our heritage railways is so very important. Many of us grew up seeing the very first diesels in action on the national network, and as a result they mean a lot to us. Like many others, I’m very grateful for the immense effort that’s put into looking after our heritage diesel fleet in the UK.”

Porterbrook has announced that they have donated HST Powercar No. 43102 to the National Railway Museum.