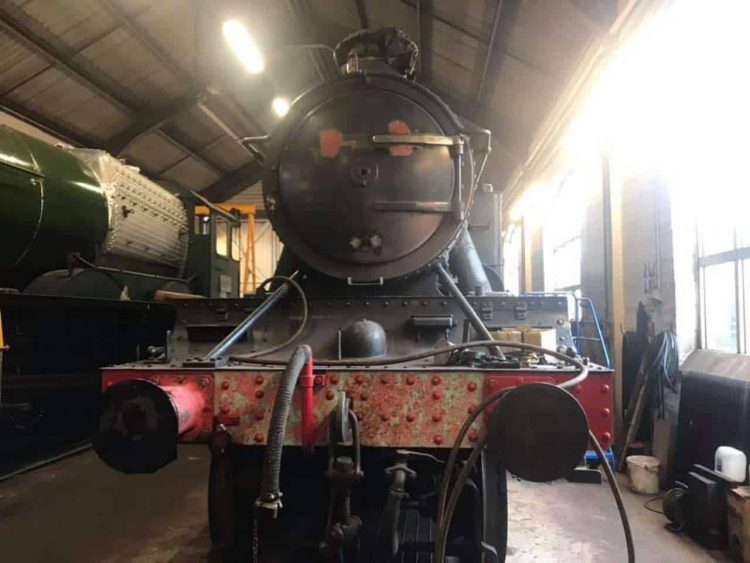 Work is being completed at the West Somerset Railway to give GWR Large Prairie No. 5199 a new coat of paint and a new livery at Minehead MPD.

The work is being funded by The 5199 Project itself and will see the locomotive painted into GWR Green with GREAT WESTERN written on the tanks.

Whilst the repaint work is taking place, the boiler cladding will have some attention.

The locomotive is due to be finished ready for service in July in time for the peak season at the West Somerset Railway.

5199 is the perfect locomotive for the West Somerset Railway and will look great running alongside other resident locomotives, like 7822 Foxcote Manor.

Appeal launched ahead of steam locomotive 5199’s overhaul – can you help?

The 5199 Project is currently running a Go Fund Me page to raise money towards the next overhaul. You can donate towards the £5,000 goal (at the time of writing the group has raised £270 pounds) by clicking here.

GWR locomotive 5199 was completed at Swindon Works in December 1934 to the design of C B Collett as a rebuild of the 3101 class by Churchward. 5199 spent most of its life working in Birmingham on commuter trains before moving to Gloucester in the early 1960s. It didn’t spend long here before being withdrawn and sent to Woodhams Scrapyard at Barry.

After spending 22 years at Woodhams Scrapyard the locomotive was purchased by the Great Western Steam Locomotive Group and was moved to the Gloucestershire Warwickshire Railway in 1985. The Llangollen Railway welcomed the locomotive in 1988.

If you would like to learn more about the behind the scenes work, make sure to join the WSR Mechanical Engineering Dept News Facebook Group.