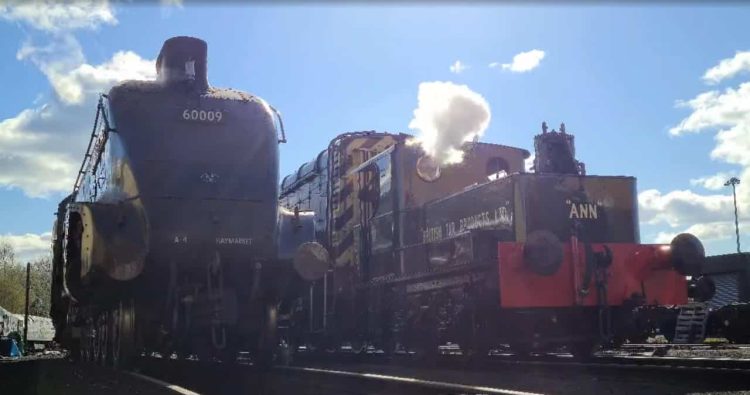 Over on the Sentinel No. 7232 ‘Ann’ Facebook page, they have posted a video showing Ann side by side with LNER A4 No. 60009 Union of South Africa on the East Lancashire Railway

The video shows both the A4 and Sentinel having a ‘whistle off’ outside Bury Baron Street Works.

Ann has just had her restoration completed over the past six months, whilst 60009 Union of South Africa was having her last annual boiler exam before working the last year of her ‘heritage only’ boiler ticket.

Just 6 months have passed since Sentinel ‘Ann’ arrived at the East Lancashire Railway, the restoration of the locomotive is complete.

The 27th February 2021 saw the locomotive make her first movements under steam, a major milestone for the project.

Ann has now been used on some shunting duties around Bury Baron Street to allow the owners to be able to get used to the engine.

Here is the whistle off video:

Following an overhaul carried out LNWR’s workshop at Crewe, 60009 underwent a series of test runs starting on Monday 16th of July 2012, where ‘running in’ showed issues such as hot boxes on the tender.

These issues were sorted in time for “Union of South Africa”‘s first booked mainline tour, the North Wales Coast Express on Sunday 22nd of July 2012, which the engine hauled throughout the summer.

From then onwards 60009 has mainly been based on mainline, travelling to destinations across the UK, from North Wales as mentioned above to the length of the famous East Coast Mainline. Visits to heritage lines have been made where possible, such as the East Lancashire Railway.

On several dates between 2013 and 2014, “Union of South Africa” took part in celebrations for the 4468 “Mallard”‘s 75th anniversary since breaking the world speed record for steam traction on Sunday 3rd of July 1938.

The next event 60009 took part in was the reopening of the Borders Railway between Edinburgh Waverley and Tweedbank on Wednesday the 9th of September 2015, with Her Majesty Queen Elizabeth, Prince Phillip Duke of Edinburgh and Scottish First Minister Nicola Sturgeon on board.

“Union of South Africa” almost didn’t haul the train, as a few weeks before it suffered a hot box on one of the coupled wheel axleboxes and required repairs at the South Devon Railway.

On Saturday the 7th of March 2020, 60009 hauled its last mainline tour on its current mainline boiler certificate, which was The Yorkshireman.

“Union of South Africa” is planned to operate on the East Lancashire Railway until the end of 2021, when its heritage boiler ticket expires. East Lancashire Railway are proud to receive the Heritage Railway Association Award for External Communications for its innovative...