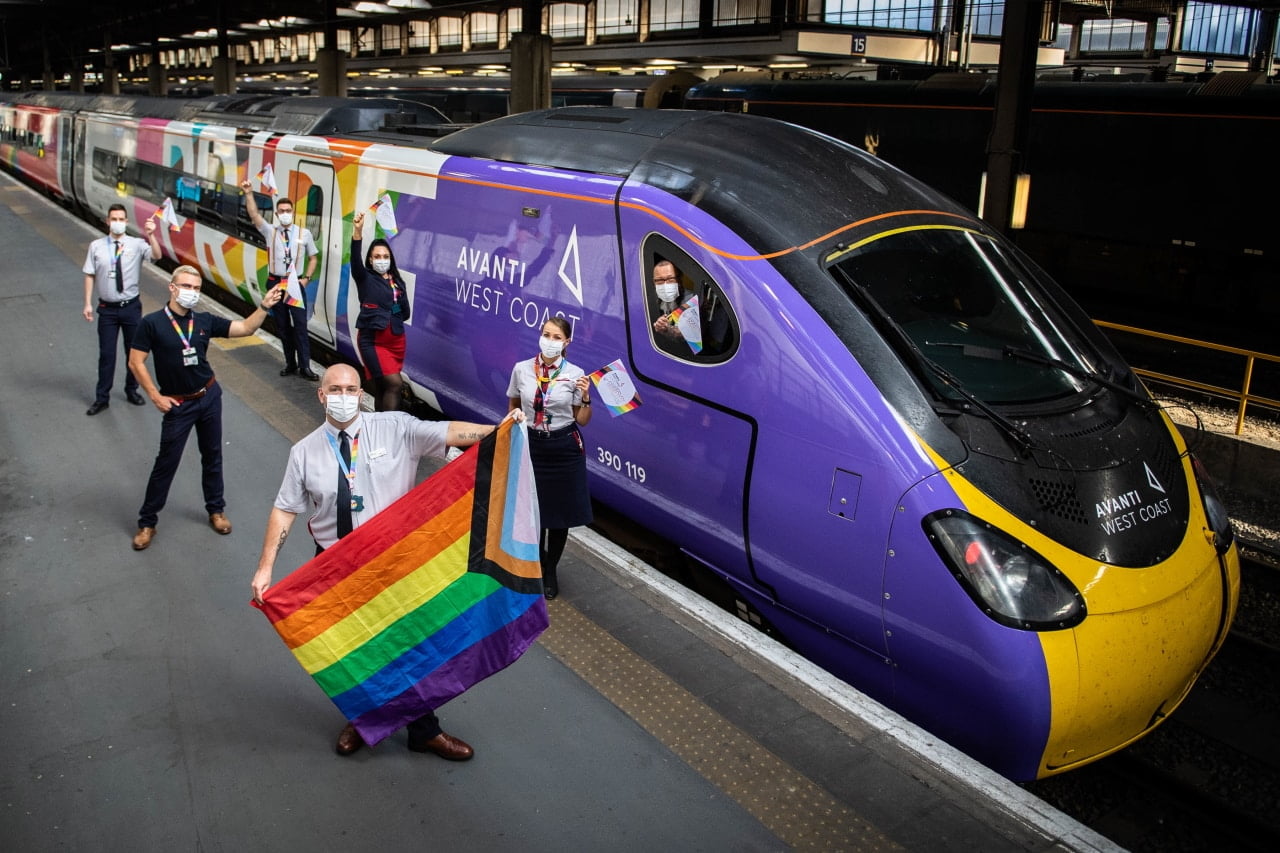 Avanti West Coast has announced that it has been named as one of the Top 10 Inclusive Employers in the UK thanks to its commitment to the LGBTQ+ community.

The rail operator has been shortlisted in the Inclusive Employer or Company category at this years British LGBT Awards – the biggest of its kind in the UK with a number of celebrity nominees, including RuPaul, Carla Delevingne and Eugene Levy.

Avanti West Coast has been recognised by the awards panel after the introduction of Live Proud last year. As part of this, the operator launched ‘the biggest Pride flag in the UK’, the 11 carriage Pendolino train wrapped in Pride colours.

Unlike other Pride trains, Progress is in operation all year in its special livery.

Paul Austin, a train manager for Avanti West Coast, who was part of the crew for the Pride Train launch, said: “I am very lucky to work for an employer where I can not only be myself without fear but where I am celebrated. Avanti West Coast cares about inclusion in all forms and continually works with its staff to create a truly inclusive workforce that I’m proud to be a part of.”

Avanti West Coast’s Executive Director, Commercial, Sarah Copley said: “I’m incredibly proud that Avanti West Coast has been recognised as one of the top 10 inclusive employers in the UK. Our Live Proud campaign comes from the heart. It was created by our people, and driven by our LGBTQ+ network, determined to develop something unique and meaningful which speaks volumes about our values. The Pride Train – named Progress – has become a symbol of our commitment to a complete culture of diversity and inclusion for our colleagues and the communities we serve. We’re always listening to one another, ensuring we promote a culture we can be proud of with a strategy that’s right and relevant. Having created the biggest Progress Pride flag in history, we’re proud to wear our heart on our sleeve as Progress travels up and down the West Coast Main Line 365 days a year.”

Diversity and Inclusion Lead at Avanti West Coast, Melanie Hockenhull said: “Being nominated as one of the Top 10 Inclusive Employers reflects the hard work and dedication of our people to continually make Avanti West Coast a great place to work.  Creating an inclusive workplace cannot be the responsibility of one person or team. From our LGBTQ+ staff network, to our brand and PR teams, we’ve worked together to make LGBTQ+ inclusion a reality. But we also know there’s more to do, and we look forward to developing our approach.”

Founder of the British LGBT Awards, Sarah Garrett MBE, said: “These awards shine a light on those who stand shoulder-to-shoulder with the LGBT+ community.

“Avanti West Coast, like all of those of the shortlist, is thoroughly deserving of this nomination due to an ongoing commitment to raising awareness of, or advancing, LGBT+ rights. Avanti West Coast is a brilliant example of a business which puts inclusivity and diversity at its heart.”