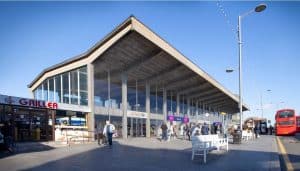 Train operator c2c has announced that work to restore the façade of Barking Railway station is underway.

The railway station at Barking is a Grade II listed building that was constructed in 1959 and is being restored thanks to the Railway Heritage Trust.

Designed by H.H. Powell, the chief architect of the Eastern Region of the British Railways Company, the project architect was John Ward, and C.R.Price were the general contractors.

Included in the project is the removal of the internal retail units adjacent to the front along with cleaning the glass and concrete structure. This will open up the facade to show the original features.

The modernist design of the structure was created using 22ft high columns over 14 glazed bays with pre-stressed concrete beams creating the ‘zig-zag’ profile of the roof.

A new ticket hall will be created as part of the scheme at the station.