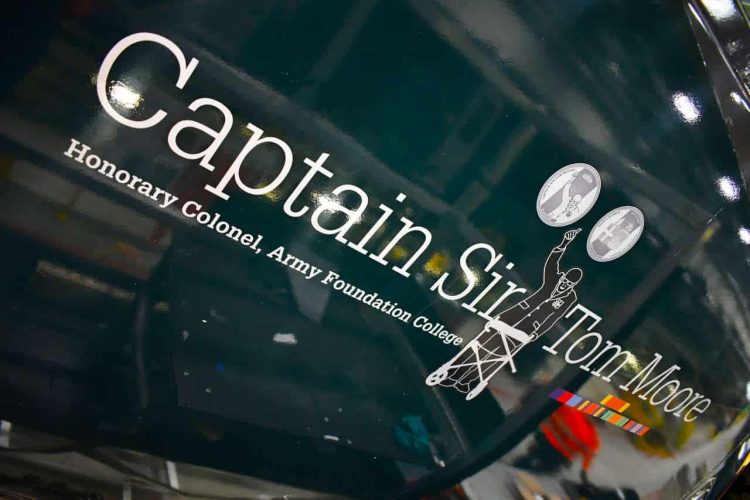 The epic journey is part of the Captain Tom 100 challenge.

At the end of this month, the train will begin the 100 stop challenge by stopping at 100 stations on the GWR network in just over 40 hours and covering almost 1,500 miles.

The class 800 Intercity Express Train 800025 will start the ‘Captain Tom Centennial’ at London Paddington railway station at 0637 on the 30th April.

The train will call at stations on routes to Penzance, Swansea, Hereford and Bristol Temple Meads over the next 40 hours.

Captain Tom passed away earlier this year and the 30th April would have been his 101st birthday.

He raised over £38m for the NHS Covid-19 appeal after completing 100 laps of his garden.

His simple message of hope – ‘Tomorrow will be a good day’ – inspired millions around the world and brought comfort and joy to many during the pandemic.

The Captain Tom Foundation is urging everyone, of all ages and abilities, to take part in the Captain Tom 100 to honour him and his achievements. More information can be found here

The ‘Captain Tom Centennial’ will call at stations along the following routes:

GWR Head of Communications Dan Panes said: “What makes calling at 100 stops in the ‘Captain Tom Centennial’ so unique is the geographical challenge. Normally our Class 800 trains wouldn’t travel down to the South West but we wanted to do our bit to ensure Captain Tom’s legacy lives on and reaches all parts of the GWR network.“We were delighted to name a train in his honour last April following requests from both colleagues and customers. Now we’re hoping people will enjoy following the progress of the ‘Captain Tom Centennial’ and donate in the name of Captain Tom.”

Captain Sir Tom’s daughter and Co-Founder of The Captain Tom Foundation, Hannah Ingram-Moore, said: “My father would have simply loved the idea of the ‘Captain Tom Centennial’ train making an epic journey as part of this special event. He was very proud to leave behind the growing legacy of his Foundation and would have really enjoyed watching people across the country uniting to have fun and inspire hope with their Captain Tom 100 challenges. It’s going to be a very special few days.”